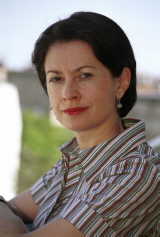 How can Europe develop a reasonable concept for the control of migration? This will be the question dealt with by the Green Party Member of the European Parliament Barbara Lochbihler in her presentation “Bridges to Europe – Challenges for a European Migration and Refugee Policy”. The ZAK Center for Applied Cultural Science and Studium Generale will organize this presentation at the KIT as the Jean Monnet Keynote Lecture on Tuesday, June 30, 18 hrs, at the Audimax (Straße am Forum 1, building 30.95).

Barbara Lochbihler links politics on the European level with her commitment to a consistent EU foreign policy based on human rights. In her opinion, a value-oriented behavior of the EU is crucial to develop, also in times of global crises, rules that are valid all over the world and protect the natural bases of life and the interests of the weaker. According to Lochbihler, Europe has to actively face the challenges of refugee protection for political, le-gal, and moral reasons in order to put an end to dying at the external frontiers of the Community. Her presentation will focus on the function of migration and on how Europe may design a reasonable concept for migration control, which goes beyond a pure fortress policy.

Barbara Lochbihler, born in 1959 in Ronsberg/Allgäu, worked as the general secretary of the Women’s Interna-tional League for Peace and Freedom in Geneva from 1992 to 1999. From 1999 to 2009, she was general sec-retary of the German section of Amnesty International. In the course of the elections for the European parliament of June 7 this year, she was elected member of Bündnis 90/Die Grünen in the European parliament.

Admission to the event that addresses the interested public will be free.

ZAK organizes the presentation “Bridges to Europe” in cooperation with the Karlsruher Universitätsgesellschaft and the Heinrich-Hertz-Gesellschaft. The presentation is the Jean Monnet Keynote Lecture that is organized at ZAK once per semester as part of the Jean Monnet Teaching Module “European Integration and Idendity”. It is funded by the European Commission.

The Karlsruhe Institute of Technology (KIT) is the merger of the Forschungszentrum Karlsruhe, member of the Helmholtz Asso-ciation, and the Universität Karlsruhe. This merger will give rise to an institution of internationally excellent research and teaching in natural and engineering sciences. In total, the KIT has 8000 employees and an annual budget of 700 million Euros. The KIT focuses on the knowledge triangle of research – teaching – innovation.