Well-known, but Capable of Development 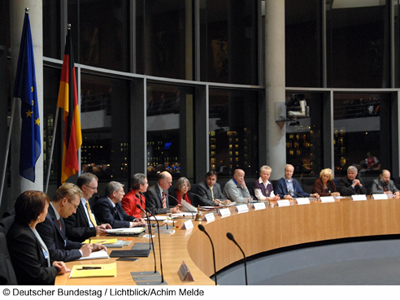 Two of three Germans have a conception of the right to petition, every fifth German has already filed a petition. Petitions are mostly filed by elderly, well-educated men. To them, thorough handling of their concerns mostly is more important than a rapid reply. There are no significant differences between the new and old federal states. These are the results obtained by KIT’s Office for Technology Assessment with the German Federal Parliament from its first representative survey regarding the German petitions scheme. At today’s annual press conference of the Committee on Petitions of the Federal Parliament, the survey will be presented to the public in the presence of the President of the Federal Parliament, Norbert Lammert.

The possibility of filing petitions to administrations or parliaments is one of the guaranteed basic civil rights in Germany. The petitions mostly are complaints or requests to modify or adopt certain laws. So far, data on the popularity and use of the right to petition have not been available in Germany. Now, this gap is closed by the survey “Publicity and Reputation of the Committee on Petitions of the German Federal Parliament and Use of the Right to Petition in Germany” made on behalf of the Office for Technology Assessment with the German Federal Parliament (TAB). The TAB office in Berlin is run by the KIT Institute for Technology Assessment and Systems Analysis (ITAS).

As regards the publicity and use of the right to petition, it was found that 67.1% of the population have heard of this right and that 21.4% have used it at least once (by supporting or filing a petition). 19.3% of the population have supported a collective or mass petition by their signature. 3.6% initiated or filed a petition on their own. The majority of petitioners are elderly, well-educated men interested in politics, who know how to use the internet. As far as the publicity and use of the right to petition in Germany are concerned, there are no differences between the East German and the West German population. “While the former finding”, says project head Ulrich Riehm from the Office for Technology Assessment with the German Federal Parliament, “meets our expectations, the latter result is surprising, as the population in the new federal states has been considered more active in terms of petitions so far.”

Of all potential addressees of a petition (committees on petitions and ombudsmen of the federal states, committee on petitions and ombudsman of the European Parliament), the Committee on Petitions of the German Federal Parliament is known best. 52.4% have already heard about it. However, the petitioning scheme competes with other processes of political participation. Rates of participation in collections of signatures (64.5%), manifestations (41.2%), public political discussions (39.6%), and direct contacts of political representatives or representatives of the administration (35.6%) by far exceed that of participation in petitions (21.4%). “Still, the fact that about every fifth German has already used the instrument of petitions shows that this fundamental right plays an important role for the population”, says Ulrich Riehm.

As regards the handling of their petition by the Committee on Petitions of the Federal Parliament, 37.7% of the persons interviewed consider the thoroughness of its treatment to be most important, followed by an understandable reply, and a rapid handling. So far, the long handling times of petitions in particular have been criticized by the public. Evaluation of the paths of submission of a petition to the German Federal Parliament also is surprising: 48.0% favor the letter, 26.7% personal contact, and 18.1% submission via the internet. Personal contact, an option that does not exist at the moment, is even preferred by people aged under 24. Hence, the letter option and the internet option do not fulfil all wishes of the population with respect to a simple access to the Committee on Petitions.

In total, 1014 persons were interviewed by telephone in November 2008. The survey is representative of the German resident population from the age of 16. Representativeness is limited as far as people of foreign nationalities are concerned. The survey is part of the technology assessment project “Public Electronic Petitions and Civil Participation” executed by the TAB on behalf of the Federal Parliament from 2006 to 2008. The reason for this project was the model test “Public Petitions” that was started in September 2005 to include the internet in the petitioning scheme. Since then, petitions can also be filed electronically, signed for support in the internet, and discussed in forums.

The TAB analysts accompanied the “Public Petitions” test on a scientific level and analyzed the benefits and consequences in the context of the development of the petitioning scheme and e-democracy. The elements of the model test were rated positively by the persons interviewed. The options offered since 2005 to inform on petitions on the internet are rated good or very good by 73.0% of the persons interviewed. 65.8% consider the discussion options and 59.4% the possibility of signing petitions on the internet to be good or very good.

The results of the survey were published in the TAB background paper No. 17. It may be obtained from the Office for Technology Assessment with the German Federal Parliament (buero@tab.fzk.de) or downloaded from the TAB website (www.tab.fzk.de). The final report of the complete project was published in a book in June 2009 (Ulrich Riehm, Christopher Coenen, Ralf Lindner, Clemens Blümel: Bürgerbeteiligung durch E-Petitionen. Analysen von Kontinuität und Wandel im Petitionswesen, Edition Sigma, ISBN 978-3-8360-8129-0).