In the Future, the Sulfosalt May Be Used as Seminconductor in Solar Cells 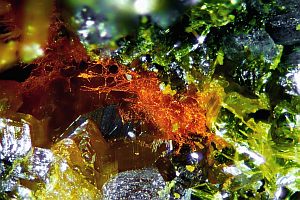 The mineralogist Dr. Farahnaz Daliran from the Institute for Applied Geosciences of KIT has discovered a new mineral in northwestern Iran. The mineral has now been approved by the International Mineralogical Association (IMA) and was named “Daliranite” in the honor of the researcher.

The mineral with the formula PbHgAs2S6 is a sulfosalt. Sulfosalts are sulfur compounds with semi-metals. They are excellent semiconductors and may be applied in photovoltaics in the future. Its use in solar cells is currently being studied. “For industrial purposes, we could grow large crystals of Daliranite”, explains Farahnaz Daliran. The only natural occurrence of Daliranite known so far is in the region of Takab in northwestern Iran.

Daliran found the new mineral already in 2001. At the time, she was working at the Institute for Applied Geosciences on a project funded by the German Research Foundation (DFG), which was focused on the gold metallogeny in the geothermal field of the Takab region. At Zarshouran arsenic-gold deposit, the mineralogist noticed the red-orange colored mineral. Daliranite is very soft (Mohs hardness 1 to 2) and consists of very fine fibers of less than 20 µm thickness.

Samples of the mineral were sent to professor Werner Paar, specialist for sulfosalts at the University of Salzburg. After detailed studies in cooperation with Daliran and an international team, he could confirm that it was a mineral previously unknown. The Commission of New Minerals of the International Mineralogical Association (IMA-CNMNC) approved the mineralogical data and the name “Daliranite“ under number 2007-010. The name honors Farahnaz Daliran in recognition of her outstanding contribution to German-Iranian cooperation on ore deposit research. Werner Paar and his team have now published the results of their studies in the “Mineralogical Magazine“ (Vol. 73(5), pp. 871-881).

Karlsruhe Institute of Technology (KIT) is a public corporation and state institution of Baden-Württemberg. It fulfills the mission of a university and the mission of a national research center of the Helmholtz Association. KIT pursues its tasks in the knowledge triangle of research, teaching, and innovation.