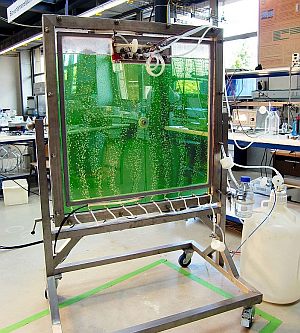 The plate-type reactor at the laboratory ensures optimum light management in the cultivation of algae. (Photo by: Florian Lehr)

Hydrogen (H2) extracted from water is considered an environmentally compatible energy carrier for the future. Nevertheless, its use in the future energy mix will also depend on the development of sustainable production methods. Certain monocellular green algae and cyanobacteria are capable of producing hydrogen from water with sunlight. Together with eight partners, KIT scientists are currently working on developing highly efficient processes for the extraction of hydrogen from microalgae. The “HydroMicPro” project is funded by the BMBF with a total of 2.1 million Euros.

The “Hydrogen from Microalgae: With Cell and Reactor Design to Economic Production” (HydroMicPro) project that is conducted jointly by universities, research institutions, and enterprises is coordinated by Professor Clemens Posten from the KIT Institute of Life Science Engineering. In the coming three years, the Federal Ministry of Education and Research (BMBF) will finance the project from funds of the “Fundamental Energy Research 2020+” funding program.


“HydroMicPro is aimed at developing an inexpensive, highly efficient production process with optimized biology and process technology, which is suited for the mass production of hydrogen”, underlines Pos-ten.

Investment costs for the cultivation of algae shall be in the order of about 25 Euros per square meter floor area. The partners from science and industry will focus on the photobioreactor, gas separation by membrane processes, biological sensor technology for cellular oxygen, biotechnological optimization of algae, and systems integration. Practical field tests will be conducted and tests for space applications performed. In addition, environmental and cost analyses will be made. Apart from KIT (Campus North and South), the University of Bielefeld, the Max Planck Institute for Molecular Plant Physiology (MPI), Potsdam, the University of Potsdam, Ehrfeld Mikrotechnik BTS GmbH (EMB), Wendelsheim, IGV GmbH, Nuthetal, and OHB-System AG, Bremen, will participate in the project.

The KIT Microalgae Working Group will develop an optically structured photobioreactor. As compared to conventional reactor concepts, it is planned to first enlarge the inner surfaces of the reactor. Together with a very small layer thickness, this shall result in a high efficiency and enhanced cell concentration. Usual gassing of the algae with growth-promoting carbon dioxide shall be accomplished via membranes in order to minimize the consumption of auxiliary energy. This is, where KIT’s Engler-Bunte Institute is involved in the project. The reactor will be developed in two steps. In the first step, a high amount of biomass shall be produced. Such high amounts will also be needed for producing other valuable materials from algae in the future. In a second step, the system will be optimized for hydrogen production.

The University of Bielefeld is responsible for the identification and biotechnological optimization of the algae for biomass and H2 production in photobioreactors. The MPI will concentrate on the regulation and control of cell-internal oxygen concentration and develop a sensor based on transgenic and physiological/biochemical processes. The working group at the University of Potsdam will develop a method to measure cell-internal oxygen concentration. EMB will contribute experience gained from using a micro photobioreactor and elaborate the concept of the production plant. Experience from the use of a thin-film reactor will be contributed by IGV. It will validate the new process under close-to-practice field conditions. OHB-System AG will connect the bioreactor system for hydrogen production to energy-transforming systems. In addition, OHB-System AG will evaluate adaptation of the system to space applications.

The KIT Institute for Technology Assessment and Systems Analysis (ITAS) will evaluate the potential contributions of HydroMicPro technology to sustainable hydrogen supply. It will identify the ecological and socioeconomic “hot spots” of the technology. Based on the results, processes for hydrogen production from microalgae will be improved and appropriate applications in the energy system identified.

The result shall be a prototype reactor that allows for an economically efficient hydrogen production from microalgae. For implementation in large plants, the next milestones are already in sight: Automation of the plant, optimization of service life, and mass production of materials (microstructurization of membranes and coating of transparent materials).

Karlsruhe Institute of Technology (KIT) is a public corporation and state institution of Baden-Württemberg. It fulfills the mission of a university and the mission of a national research center of the Helmholtz Association. KIT pursues its tasks in the knowledge triangle of research, teaching, and innovation.