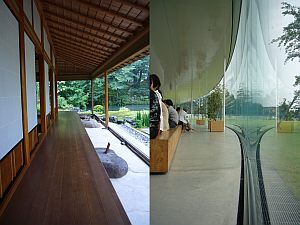 Conflicting priorities between traditional and contemporary architecture in Japan are the subject of a project funded by KUG. (Photo by: Ansgar Staudt)

The Karlsruher Universitätsgesellschaft (KUG, Karlsruhe University Society) has decided to fund research and education projects in the university sector of Karlsruhe Institute of Technology (KIT) with about EUR 100 000. Two projects, one to develop highly efficient catalysts for cleaning diesel exhaust gases and one on the society and architecture of Japan, were presented by KUG at today’s meeting with the press.

“Especially in times of financial shortage, direct support of urgent university projects is one of the most noble and pleasant tasks”, underlined the Chairman of the KUG Board, Honorary Senator Horst Marschall. “It is the trademark of our KUG and its active members to rapidly support quality in an uncomplicated manner”, added Professor Fritz Hartmann Frimmel, the Deputy Chairman. The KUG is the most important sponsoring association for the university sector of KIT and was founded more than 90 years ago.

One of the funded projects deals with the cleaning of air. Soot particles from diesel exhaust gas represent a high health risk. For this reason, scientists of the KIT Institute for Technical Chemistry and Polymer Chemistry are working on the development of highly efficient catalysts to prevent these hazardous soot particles from being released into air. At established exhaust gas temperatures, these newly developed catalyst materials shall reduce the emission of diesel soot with the help of oxygen.

KUG has agreed to finance a modern diesel aggregate for practically relevant fundamental studies at the laboratory. In the first phase of their environmental project, the researchers can now analyze the effect mechanism of various catalyst types and the soot oxidation rate. “The investigations using the new aggregate will be followed by another project phase”, says private lecturer Dr. Sven Kureti. “Work will then aim at specifically developing novel catalyst materials for use in diesel cars, commercial vehicles, buses, construction vehicles, and even ships.” The diesel aggregate funded by KUG will also be used for the education of students.

The second project presented by KUG focuses on Japan and its culture and architecture. Japan still is looked at by the Western world with a mixture of admiration and rejection. “For future architects, who will have to develop construction solutions for complex problems in all areas of society, in particular, it will be worthwhile to look into this foreign, and for us exotic, society”, explains Professor v. Christoph Kuhn from the KIT Institute for Building Design.

The Japan project consists of a seminar in the 2009/2010 winter semester, an excursion to Japan for two weeks in late March 2010, and the design of a building in the summer semester of 2010. The seminar will pursue two parallel approaches: Analysis of the geography, history, social structure, and ideology of Japan as a prerequisite for the evolution of a specific settlement, urban, and construction culture and detailed examination of Japanese wood architecture under the aspects of structure, construction, material treatment, and the relation to the environment.

Work is aimed at understanding the background for the development of a conception of space, design principles, and the conception of beauty in Japan. During the excursion to Japan, students from Karlsruhe will exchange information with students of the Nihon University, College of Science and Technology, at a workshop of two days’ duration. In parallel, Japanese and German students will work on a design project in Tokyo in the summer semester. At the end of the summer semester, a joint presentation and discussion of the designs is planned to take place in Karlsruhe. The KUG will fund the excursion of the students to Japan.