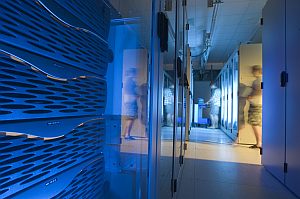 After a one-year repair, the largest particle accelerator in the world, the Large Hadron Collider (LHC) at the European Research Center CERN, is now ready for operation again. Last Friday, CERN scientists for the first time succeeded in sending two proton beams in opposite direction through the LHC. This restart of operation also results in new challenges for the Grid Computing Centre Karlsruhe (GridKa) that is part of the Steinbuch Centre for Computing (SCC).


To process and evaluate the gigantic amounts of data produced by the particle accelerator, several thousand scientists from 50 nations have established a global network of computers. One of the eleven main node points worldwide is the Grid Computing Centre Karlsruhe (GridKa) of the Steinbuch Centre for Computing (SCC).

“At CERN, a data volume of about 16 petabytes per year is expected to arise”, explains Dr. Holger Marten, Head of the SCC Distributed Systems and Grid Department. A petabyte is one trillion bytes – this data volume corresponds to about 1.4 million CDs. Such data volumes require enormous computing capacities – as one of the tier-1 centers of the worldwide grid infrastructure, GridKa supplies a major share. At SCC, more than 8600 central processing units and hard disks and tapes with a total capacity of about 14 petabytes have been made available in the meantime for the evaluation and analysis of the LHC experiments. “After this restart, we are looking into an exciting future – GridKa and the entire European and worldwide grid infrastructure are now being operated under real conditions”, says Holger Marten. This does not mean, however, that past work was done for testing only. The scientists from Karlsruhe have been evaluating detector data from cosmic radiation events, so-called “cosmics”, since a year already. Within the international grid infrastructure, more than 200 virtual organizations are currently processing between 300,000 and 400,000 jobs per day.