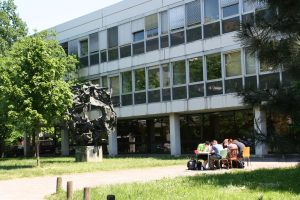 Learning and relaxing – the optimum campus allows for both. (Photo by: Lilitih Paul)

The cafeteria: Place with sociable people and the possibility to learn or place of learning with a catering station? Requirements made by students on a university as a place of learning and living and their wishes were analyzed jointly by the KIT Institutes of Sociology and of Urban, Regional, and State Planning. For a period of two weeks, 60 students documented their ways and activities on Campus South for “My Campus”. On this basis, sociologists and urban planners have now distinguished four types of campus users.

The “homie’s” domestic kitchen table is the “college” type’s regular seat at the institute’s library. “The homie sees the campus as a place of pure acquisition of information, he prefers to learn and work at home”, says Alexa Maria Kunz, scientist of the Institute of Sociology. “In contrast to this, the college type would even spent the night on the campus, if he had a bed here.” This college type considers the campus to be the center of his life and apart from teaching and learning seminars, he also takes part in cultural and sports events. The “separator” experiences his university as a pure place of work, while the “flaneur” is mainly interested in leisure activities on the campus. The “integrator” understands the campus to be one of several parts of his student’s life.

Sometimes, the requirements made by these five types on the quality of rooms and services vary: “Student commuters, for instance, consider the distances to train stations or open seminar rooms, where they can spend waiting times in a reasonable manner, much more important than students, who can go home in between”, explains Professor Michaela Pfadenhauer from the Institute of Sociology.

Apart from the five user types, sociologists and urban planners also identified a number of group-overlapping perceptions of students. In total, participants in the study evaluated Campus South positively. Here, they find a relatively wide selection of places for both work or breaks and leisure. On campus maps, they documented their ways and stops and presented the places they considered to be comfortable and less attractive in words and by photos. “Thanks to these records and comments, we now have detailed evaluations of a total of 137 places, buildings, rooms, and free areas”, says Professor Kerstin Gothe from the Institute of Urban, Regional, and State Planning. “On this basis, we have formulated recommendations for the further planning of Campus South.”

The green and free areas and the vicinity to the city center were considered strengths of Campus South by many students. Places conveying a “university feeling” were evaluated positively: The inner yard of the canteen, the meadow near the forum with occasional cultural events, or the Ehrenhof as a zone of rest with historical buildings. Students also praised services, such as the 24-hour library. Many interior rooms were rated less well: The students wished to be provided more places for working in groups or alone and other catering facilities. According to the students, the traffic situation at the campus entries and on the area itself is problematic. The bicycle clearly is the favorite transport means.

The study is complemented by an “optimum campus” scenario as well as by best-practice examples that present solutions for the problems mentioned by the students on the campus in Karlsruhe. “My Campus – Räume für die Wissensgesellschaft. Eine explorative Studie zu Raumnutzungsmustern von Studierenden“ (My Campus – rooms for knowledge society. An explorative study of area use patterns of students) will be published in January 2010 by the VS Verlag.