First Academic Anniversary Celebration of KIT after the Merger 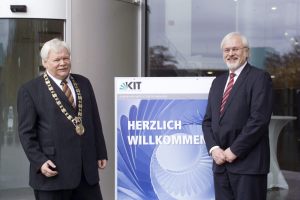 “The university and research center have become history, we are starting a new era”, this is how Professor Horst Hippler welcomed the guests of the 2009 Academic Anniversary Celebration. Professor Eberhard Umbach and Hippler, the dual leaders of KIT, hosted the first anniversary celebration in the KIT era for nearly 600 guests. Umbach compared the merger process with a mountaineering expedition through pathless terrain. But the destination is worth all the stresses and strains.


“Every member of a mountaineering expedition team knows the feeling of facing a big challenge.” According to Umbach, the first summit only is a foresummit. In mountaineering, it often is the point of pausing and doubting. But every mountaineer also knows the feeling of delight when reaching the real summit. Umbach underlined that after many stations, KIT has now reached the first fore-summit. In the past academic year, major milestones were the unanimous adoption of the KIT Merger Act by the state parliament, the signing of the administrative agreement of the Federal Republic of Germany and the State of Baden-Württemberg, and the official foundation of KIT on October 1st. “By using this mountaineering metaphor, I would like to say”, underlined KIT president Umbach “that we have not yet reached our final destination!”

Lord Mayor Heinz Fenrich pointed out that the city of Karlsruhe supports KIT on its way. According to him, the foundation of KIT strengthens the innovative capacity of both the city and the region and is unique in the German university system. Fenrich pointed out that not only excellent research at KIT, but also fruitful cooperation of science and industry are major factors in the Karlsruhe Technology Region. The international focus of KIT is a challenge accepted by the city of Karlsruhe. Under its initiative “Studentenstadt Karlsruhe” (Students’ City Karlsruhe), the city will offer young people an attractive environment: “Students keep Karlsruhe young!”, emphasized Fenrich.

The speech of KIT president Hippler focused on the different dimensions of Hegel’s favorite German word “aufheben”. Hippler thought about the first meaning of this word according to the Swabian philosopher, which is to abolish something. He said that some people may regret the disappearance of the research center and the university, as it may be suspected from the crosses put up by some jokers on KIT Campus South. But according to Hippler, a cocoon would be much more fitting than the signs of grief, “as we have turned into KIT, but still remain visible.” He pointed out that the mission of a university and that of a research center in the Helmholtz Association have not been abolished, but linked. The German word “aufheben” also has the meaning of “to preserve”. Hippler pleaded for a permanent culture of change – as an icebreaker in the science community - but also for preserving proven systems, such as the close cooperation with partner universities and industrial companies. The third meaning, as was pointed out by Hippler, is making fuss: “I am very pleased that we are making fuss and thus break up the encrusted German science system!”

In the course of the Academic Anniversary Celebration, special honors were awarded. KIT President Umbach handed over the faculty teaching awards and, for the first time, Ph. D. awards in the KIT fields of competence to illustrate the high significance of the promotion of young scientists at KIT. In total, 382 doctorates were conferred in the past academic year, with the number of female Ph. D.s having nearly doubled in the past four years.

According to Umbach, the high attractiveness of KIT among students is reflected by the high number of applications. 4186 freshmen started their studies at the KIT in this winter semester. On the average, three applications were submitted for one university place.

Professor Manfred Popp, former chairman of the Executive Board of Forschungszentrum Karlsruhe, presented the Otto Haxel award of the Friends of Forschungszentrum Karlsruhe. This award honors scientific and technical achievements that resulted or are expected to result in effective innovations and major incentives for industry. This year’s award was granted to the team of Dr. Martin Sack, Dr. Christoph Schultheiss, and Professor Hansjoachim Bluhm from the KIT Institute for Pulsed Power and Microwave Technology for their method for the “Electroporation of Plant Cells on the Industrial Scale”. By means of high-power pulses, cell membranes can be made more permeable. This can be used in food technology, for instance, in the production of sugar and wine. “The persistence of the laureates in commercializing their process was a decisive argument for the jury”, underlined Popp.

The presentation on “Cosmic Particles from Remote Galaxies – a New Type of Astronomy” was made by Professor Johannes Blümer from the KIT Center for Elementary Particle and Astroparticle Physics. Since thousands of years, the night sky has fascinated people. Until about 100 years ago, man was informed about the universe by visible light. Modern observations today are also detecting invisible electromagnetic oscillations from long-wave radiowaves to short-wave, energy-rich gamma quantums. For the first time, particles from a star explosion at the edge of the Milky Way were recorded 22 years ago: This marked the start of neutrino astronomy. A new window to the universe is now opened by research into cosmic rays of highest energy: The Pierre Auger observatory in the Argentine pampa for the first time has succeeded in detecting particles from outside of the Milky Way and in generating a map of the southern sky in the light of cosmic particles. “We are just starting to interpret these magnetically distorted images”, said Blümer. KIT is a major partner in these exciting developments of astroparticle physics and coordinates the planning of a second Auger observatory on the northern hemisphere.