New Technology Allows for an Exact Positioning in Buildings 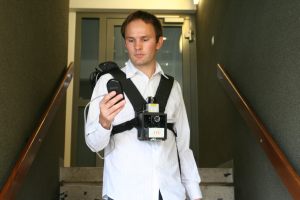 Versatile in use: The navigation system for interior rooms developed by the Institute of Systems Optimization (ITE).(Photo: Gabi Zachmann)

Satellite navigation devices facilitate everyday life, only in buildings do they reach their limits. This problem is now solved by a navigation system developed by the Institute of Systems Optimization (ITE). The device that consists of several sensors enables users to precisely orient in buildings. At the same time, an exact mapping of the buildings is possible. In the future, the system shall increase the safety of deployment of rescue forces and police units and serve as “electronic guide dog” for people with visual impairment.

Incorporated in vehicles or integrated in smart phones, navigation devices are a fixed part of mobile life. “But systems working without any problems outdoors, have not been working indoors due to lacking satellite connections”, says Professor Gert Trommer, Head of the Institute of Systems Optimization (ITE). ITE scientists Christian Ascher and Christoph Keßler have now succeeded in overcoming this “navigation gap” in buildings. For this purpose, the two Ph. D. students combined multi-sensor navigation solutions already developed by ITE with a novel foot sensor and optical sensors to replace the satellite positioning lacking in interior rooms. 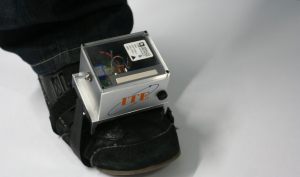 
The main component of the personal navigation system is an inertial sensor measuring acceleration and rotation combined with a digital compass and a barometric height sensor. This system is mounted on the torso and is combined with the information of the foot sensor attached to the shoe which is a kind of “3-dimensional pacemeter”, the latter can exactly reproduce movements in space.

“In principle, the inertial sensor works like our inner ear,” explains Trommer. And like the human sense of balance, the newly developed navigation system is dependent on optical feedbacks for orientation. For this purpose, the device fixed to the upper part of the body is equipped with a camera and a laser scanner covering 240° horizontally, which calculate the distances to objects, walls, and other obstacles. By constant data comparison, the navigation system acquires the position of the user with a long-term accuracy of about 30 cm. In addition, it can map the buildings entered in detail. The position can then be indicated on a portable display, on the monitor of a control room, or via a Braille interface. 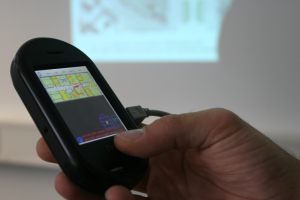 A portable interface shows the map of a building with exact position data. (Photo: Gabi Zachmann)

Scientists expect a variety of applications of their new development. In the future, the navigation system might increase the safety of the work of fire departments or the Technisches Hilfswerk (Technical Assistance Organization). It does not only allow for orientation in case of smoke development, but its mapping function may also help to find a way out of unknown buildings. Task forces of the police may be coordinated much more specifically by exact positioning. The navigation system also opens up new perspectives for blind or visually impaired people. Combined with a Braille interface, it may be used as an “electronic guide dog”.

In the coming months, the researchers will test and improve their prototype in practice together with the Federal Criminal Police Office, Wiesbaden, the Technical Assistance Organization, Mannheim, and a US organization of visually impaired people. In addition to special applications, the ITE will also focus on the mass market in the future: “Thanks to the constantly growing computing power of mobile devices and inexpensive sensors, it will be possible to integrate the pedestrian navigation system in conventional smart phones,” thinks Trommer. In a few years already, this technology may facilitate orientation in public buildings like railway stations or underground parkings at affordable prices.