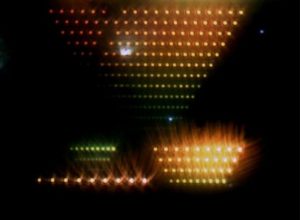 Nano dipole antennas under the microscope: The colors reflect the different trans-mission frequencies. (Photo by: LTI).

More than 120 years after the discovery of the electromagnetic character of radio waves by Heinrich Hertz, wireless data transmission dominates information technology. Higher and higher radio frequencies are applied to transmit more data within shorter periods of time. Some years ago, scientists found that light waves might also be used for radio transmission. So far, however, manufacture of the small antennas has required an enormous expenditure. KIT scientists have now succeeded for the first time in specifically and reproducibly manufacturing smallest optical nanoantennas from gold.

In 1887, Heinrich Hertz discovered the electromagnetic waves at the former Technical College of Karlsruhe, the predecessor of Universität Karlsruhe (TH). Specific and directed generation of electromagnetic radiation allows for the transmission of information from a place A to a remote location B. The key component in this transmission is a dipole antenna on the transmission side and on the reception side. Today, this technology is applied in many areas of everyday life, for instance, in mobile radio communication or satellite reception of broadcasting programs. Communication between the transmitter and receiver reaches highest efficiency, if the total length of the dipole antennas corresponds to about half of the wavelength of the electromagnetic wave.

Radio transmission by high-frequency electromagnetic light waves in the frequency range of several 100,000 gigahertz (500,000 GHz correspond to yellow light of 600 nm wavelength) requires minute antennas that are not longer than half the wavelength of light, i.e. 350 nm at the maximum (1 nm = 1 millionth of a millimeter). Controlled manufacture of such optical transmission antennas on the nanoscale so far has been very challenging worldwide, because such small structures cannot be produced easily by optical exposure methods for physical reasons, i.e. due to the wave character of the light. To reach the precision required for the manufacture of gold antennas that are smaller than 100 nm, the scientists working in the “Nanoscale Science” DFG-Heisenberg Group at the KIT Light Technology Institute (LTI) used an electron beam process, the so-called electron beam lithography. The results were published recently in the Nanotechnology journal (Nanotechnology 20 (2009) 425203). 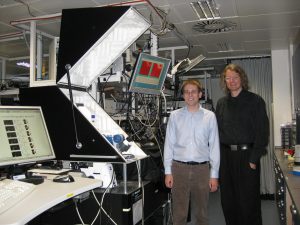 They developed a method to manufacture minute nanoantennas close to the technical limits:

Dr. Hans-Jürgen Eisler and Matthias Wissert from the LTI. (Photo by: LTI, from right to left)

These gold antennas act physically like radio antennas. However, the latter are 10 million times as large, they have a length of about 1 m. Hence, the frequency received by nanoantennas is 1 million times higher than radio frequency, i.e. several 100,000 GHz rather than 100 MHz.

These nanoantennas shall transmit information at extremely high data rates, because the high frequency of the waves allows for an extremely rapid modulation of the signal. For the future of wireless data transmission, this means acceleration by a factor of 10,000 at reduced energy consumption. Hence, nanoantennas are considered a major basis of new optical high-speed data networks. The positive side-effect: Light in the range of 1000 to 400 nm is not hazardous for man, animals, and plants.

In the future, nanoantennas from Karlsruhe may not only be used for information transmission, but also as tools for optical microscopy: “With the help of these small nano light emitters, we can study individual biomolecules, which has not been established so far”, says Dr. Hans-Jürgen Eisler, who heads the DFG Heisenberg group at the Light Technology Institute. Moreover, the nanoantennas may serve as tools to characterize nanostructures from semiconductors, sensor structures, and integrated circuits. The reason is the efficient capture of light by nanoantennas. Thereafter, they are turned into light emitters and emit light quantums (photons).

The LTI scientists are presently also working on the specific and efficient capture of visible light by means of these antennas and on focusing this light on a few 10 nm, the objective being e.g. the optimization of photovoltaic modules.