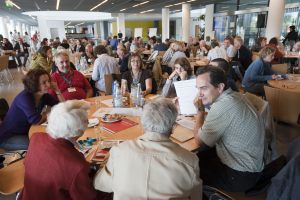 A worldwide climate agreement is urgently needed. This is the clear message of the first worldwide citizen conference that took place in parallel in 38 countries on six continents last weekend. The 44 World Wide Views on Global Warming conferences worldwide focused on aspects of global climate change and climate policy. Participants all over the world sent a clear message to the political decision-makers: We have no time to wait!

The German citizen conference was hosted by the Foundation Energy & Climate Protection Baden-Württemberg at EnBW, Karlsruhe, by invitation of the KIT Institute for Technology Assessment and Systems Analysis (ITAS). The participants discussed the same problems as citizens in all other countries and finally took the vote.

Connie Hedegaard, host of COP15, Danish Minister for Climate and Energy, and patron of the WWViews project, underlines: “World Wide Views has provided us politicians with a unique insight into the opinions of the citizens from all regions of the world on the climate crisis. It is a strong signal to politicians, if citizens all over the world agree that it is important and time to act. Moreover, it underlines the importance of concluding an ambitious agreement in Copenhagen in December 2009.”

Citizens Demand CO2 Reductions
In rich and poor countries as well as in transition countries with high economic growth, most participants are in favor of defining more ambitious targets for the reduction of CO2 emissions than those expressed in political debates so far. Presently, many politicians argue for a short-term CO2 reduction by less than 25%. A clear majority of the citizens, however, thinks that the countries should reduce their emissions by 25 to 40% or even more. The maximum temperature variation issue is handled in a similar way: While politicians favor a limit of 2°C above the pre-industrial level, 52% of the citizens participating in the WWViews conferences plead for a lower limit.

The two most important recommendations formulated by the participants of the conference at Karlsruhe for the politicians were:
“Climate catastrophe makes urgent acting necessary:
We demand binding reduction targets which are in accordance with both the capabilities and the responsibility of all countries. For control and finance international institutions are needed - also to guarantee support for developing countries.”
“Stop wasting energy:
Energy has to be used efficiently and superfluous energy consumption has to be avoided.
Raise awareness of all people in energy issues and change undesirable developments.”

In the following weeks, the results of all 44 citizen conferences will be analyzed in detail. They will be handed over to political decision-makers on November 19, prior to the World Climate Conference.

World Wide Views on Global Warming was the first worldwide citizen conference. The Institute for Technology Assessment and Systems Analysis (ITAS) of the Karlsruhe Institute of Technology (KIT) organized the German event. German results and the results of all other participating countries can be found at www.wwviews.org.

Photos and videos of the participating countries for the media: http://teknologiraad.surfoffice.eu/.
(User name: WWVpress, password: 269pressDown).

Further information on and results of the German part of the project are available at: http://www.itas.fzk.de/deu/projekt/2009/knap0932.htm.


Karlsruhe Institute of Technology (KIT) is a public corporation and state institution of Baden-Württemberg that fulfills the tasks of both a university (former Universität Karlsruhe (TH)) and a research institution of the Helmholtz Association (former Forschungszentrum Karlsruhe). KIT is an institution of internationally excellent research and teaching in natural and engineering sciences with 8000 employees and 18500 students. Its annual budget amounts to 700 million Euros. KIT focuses on the knowledge triangle of research – teaching – innovation.