On October 01, 2009, Forschungszentrum and Universität Karlsruhe Will Merge into an Entity 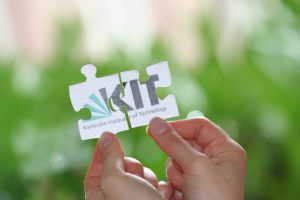 About three years after winning the Excellence Initiative, it is now reality: On October 01, 2009, Universität Karlsruhe and Forschungszentrum Karlsruhe will merge into a legal entity, the KIT, according to the Act on Establishment of Karlsruhe Insti-tute of Technology.

A cooperation results in a merger, both institutions are now an entity. Students of the university and the employees of both institutions now are members of KIT. KIT assumes the tasks, rights, obligations, authorities, and responsibilities of the former For-schungszentrum and the former Universität Karlsruhe. All contractual relations will continue to exist. KIT combines the potentials of a research center and a university in a unique manner. This is the basis for an institution of internationally excellent research and research-oriented teaching as well as a place of sustainable innovation culture.

Professor Dr. Horst Hippler, born 1946, one of two presidents of KIT, has been President of Universität Karlsruhe (TH) since November 2002. In 1993, he was appointed professor of physical chemistry at the University of Göttingen. Hippler also is the founding president of the TU9 Association.

Professor Dr. Eberhard Umbach, born 1948, one of two presidents of KIT, has been Chairman of the Executive Board of Forschungszen-trum Karlsruhe since May 2007. Before, he was professor of experimental physics at the Universität of Würzburg and President of the German Physical Society.

Dr.-Ing. Peter Fritz, born 1953, Vice President for Research and Innovation, has been member of the Executive Board of For-schungszentrum Karlsruhe since May 1999. Before, he worked in the management of Preussag Noell GmbH, Würzburg.

Dr.rer.publ. Alexander Kurz, Ass.jur., born 1961, Vice President for Economy and Finance and Acting Vice President for Staff Matters, has been Commercial Executive Director and Deputy Chairman of the Executive Board of Forschungszentrum Karlsruhe since December 2007. Before, he worked at the European Nuclear Research Center CERN, Geneva, and as commercial executive director of the Heavy Ion Research Society, Darmstadt.

The official start of KIT is accompanied by a national advertising campaign in several Germany-wide printed media, which is sup-ported by the Baden-Württemberg state marketing and the Karlsruhe city marketing offices.

Karlsruhe Institute of Technology (KIT) is a public corporation and institution of the state of Baden-Württemberg that fulfills the tasks of both a university (former Universität Karlsruhe (TH)) and a research institution of the Helmholtz Association (former Forschungszentrum Karlsruhe). KIT is an institution of internationally excellent research and teaching in natural and engineering sciences with 8000 employees and 18500 students. Its annual budget amounts to 700 million Euros. KIT focuses on the knowledge triangle of research – teaching – innovation.