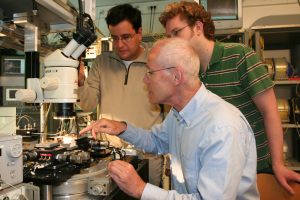 Due to demographic change, enterprises have to adapt to aging employees. An adequate working time scheme, however, contributes to preserving the health and working capacity of the staff. Within the framework of the KRONOS project, KIT researchers studied working time models tailored to an aging staff. On the basis of their results, they recommend shift plans with a more rapid forward rotation as well as tailored long-term time accounts, the credits of which can be used according to the needs of the employees.

Part-time work, short breaks, aging-tailored shift plans, and long-term time accounts were among the instruments studied by the group of researchers headed by Professor Peter Knauth from the KIT Institute for Industrial Management and Industrial Production (IIP) within the framework of KRONOS. The meanwhile completed study of “Life Working Time Models – Chances and Risks for Enterprises and Staff” was a partial project of the priority program “Age-specific Working Systems” funded by the German Research Foundation (DFG). The final report of the KRONOS project has now been published by the Universitätsverlag Karlsruhe.

KIT scientists evaluated age-tailored working time models at five enterprises in the automotive, steel, chemistry, and pharmaceutical sectors. They found that the success of such models depends on several factors: Consideration of labor science recommendations; possibility of employees of designing their working time; favorable boundary conditions and integration of the actions in a strategy to react to demographic change.

From the KRONOS project, the following detailed recommendations were derived: A general reduction of daily working time for all senior employees is not reasonable, as their health and working capacities vary strongly. However, senior employees should make more breaks. Shift plans with a more rapid forward rotation (starting from the early shift, followed by the late and night shifts) have a more favorable effect on the working capacity than traditional weekly backward rotating shift plans. It is reasonable to reduce the number of night shifts per person and year. As obvious from the study, the night shift staff can be reduced also in case of partly automated processes, if activities are shifted from the night shift to the early or late shifts. The early shift should not start before 6 o’clock.

KRONOS also suggests a larger dissemination of optional working time models, with the employees changing among various weekly or annual working times in the course of their professional life. So-called long-term accounts should not only allow for partial retirement. The credits should rather be usable according to the individual needs of the staff. For instance, it should be possible to take a time-out of several weeks or months in the course of the working life for family reasons, as it is explained by the KRONOS project head Knauth. “Such tailored models increase the attractiveness of a company as an employer and give it a lead in its competition for skilled workers, the number of which will decrease as a result of demographic change.”