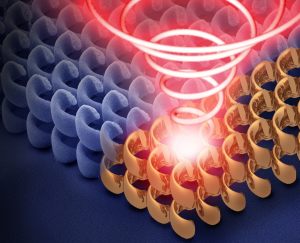 Metamaterial under the scanning electron microscope, combined with a computer graphics. The red and white helix symbolizes the circularly polarized light. (Graphics by: CFN )

Recently, metamaterials, by means of which electromagnetic waves, including light, can be manipulated, have fired the researchers’ imagination. These artificial structures possess properties that cannot be found in nature. Perfect lenses without aberrations and even invisibility cloaks à la Harry Potter can be made of metamaterials, at least theoretically. Now, scientists from the Karlsruhe Institute of Technology (KIT) describe, for the first time, three-dimensional metamaterials that could really be applied in spectroscopic measurement instruments.


The work, now reported by the renowned journal Science as a highlight on its website prior to the publication of the printed version, is based on a combination of various technologies (Science Express, August 20, 2009, 10.1126/science.1177031). To produce these novel components, the team headed by Professor Martin Wegener from the Center for Functional Nanostructures and Professor Volker Saile from the Institute of Microstructure Technology uses a laser to “write” the structure into a photoresist. Then, the structure is dissolved leaving a porous mold. In a second step, gold is deposited into the cavities of this mold until they are filled. Finally, the original polymer mold is etched off. A structure similar to a spring mattress remains: It consists of many regularly arranged, minute gold helixes of a few hundred nanometers in diameter (1 nanometer = 1 millionth of a millimeter). “The helixes teach the light that shines through the metamaterial to dance a proper waltz,” describes Wegener its functionality. Due to their structure, these three-dimensional metamaterials only let one of both senses of rotation of an electromagnetic wave pass. They act as filters for circularly polarized light. 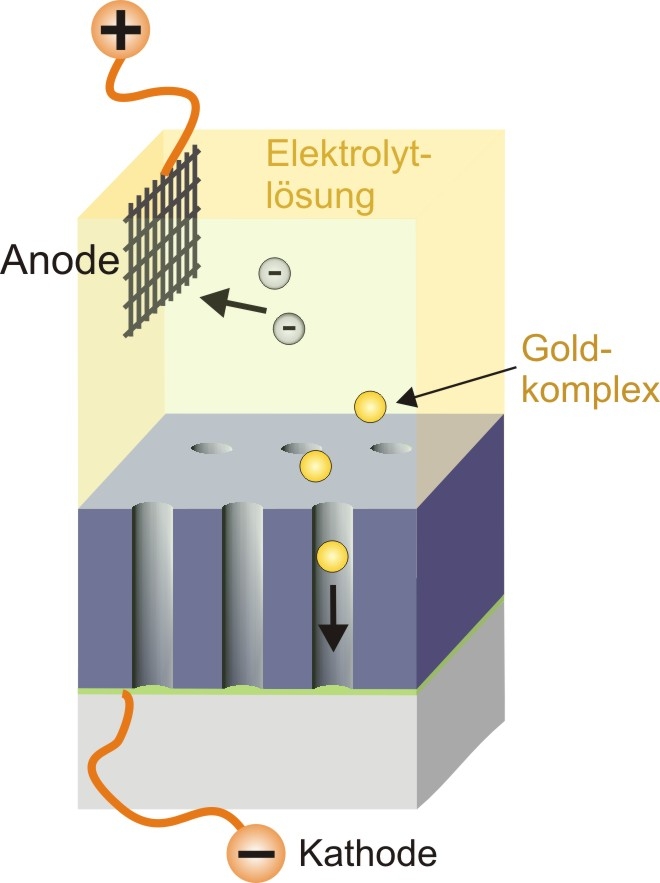 Principle of the electrochemical deposition of gold: Gold complexes dissolved in the electrolyte diffuse into the cavities of the structure, where they are decomposed near the cathode. The resulting gold ions are deposited and eventually fill the cavities completely. (Graphics by: CFN)

This property is based on the fact that metamaterials do not only directly influence the electric, but also the magnetic component of an electromagnetic wave. “Depending on the size of the helixes, such structures do this for various wavelengths and over a comparably wide range of wavelengths,” explains Justyna Gansel from the working group headed by Wegener. Her results nullify the previously observed drawback that the special properties of metamaterials were limited to a narrow frequency spectrum.

The novel compact and broadband circular polarizers might be of significant interest for a number of applications in optical spectroscopy. For instance, they might be used in handy instruments analy¬zing mixtures of substances which themselves act as polarizers. “Dextrogyrated lactic acids from yoghurt may be determined with the help of metamaterials in the future,” speculates Gansel.

With their work on nanostructured polarizing metamaterials, KIT scientists continue an old tradition in Karlsruhe: More than 120 years ago, Heinrich Hertz used a linear polarizer, of nearly 2 m in size, though, for his groundbreaking research on electromagnetic waves.

Metamaterials
Metamaterials are artificially produced structures that behave like a uniform material and possess properties not found in natural materials. They consist of regularly arranged identical elements that are far larger than atoms in a crystal, but still interact like these with electromagnetic waves. Metamaterials produced using nanotechnological methods are comprised of entities so small that they can influence electromagnetic waves with wavelengths ranging from the visible to the infrared spectrum.

Polarization
Being an electromagnetic wave, light consists of a magnetic and an electric wave component, the oscillation planes of which are vertical to each other. When these waves hit objects like glass or finest particles in air (vapor), light is reflected and the orientation of the oscillation plane may change. Polarization filters as known from photography or special sunglasses block waves with this modified oscillation plane and let only those light waves pass that oscillate vertically to the modified plane. As a consequence, the filtered light is linearly polarized. Undesired reflections in glass panes or diffused scattered light “disappear” for the observer. In case of linearly polarized light, the electric component oscillates back and forth in one direction. For circularly polarized light, this direction rotates by 360° during one oscillation. The electric component quasi describes a helix when propagating in space.