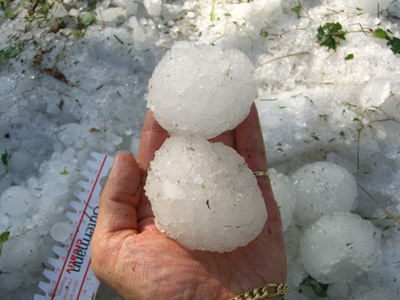 Destroyers: The number of days on which hail damages buildings increases. (Photo by: Marco Kaschuba)

The thunderstorm potential in the atmosphere increases, as does the number of severe weather events. Annual damage of buildings due to hailstorms in Baden-Württemberg exceeds EUR 30 million – these are about 25 percent of the total damage caused by natural phenomena. The risk is highest in the region of Stuttgart. This was found by scientists of the Center for Disaster Management and Risk Reduction Technology (CEDIM) within the framework of their HARIS-CC (HAil RISk in a Changing Climate) project.

The damage potential of single heavy thunderstorms may exceed the annual average by several factors: A strong hailstorm in June 2006 at Villingen-Schwenningen and Trossingen, for instance, caused damage of buildings in the amount of EUR 200 million. After the so far most expensive hailstorm in Germany in July 1984 at Munich, economic damage even totaled EUR 1.5 billion.

To better estimate the current and future hazards caused by hailstorms, KIT researchers are presently developing new methods for the combined evaluation of radar and insurance company data: “Such a hazard assessment is essential for weather warnings, preventative actions, and disaster management”, explains the head of the project, Dr. Michael Kunz from the Institute of Meteorology and Climate Research (IMK) and CEDIM. Moreover, the results suggest a relationship between hail events and climate change caused by man: In the past decades, both temperature and air humidity close to the ground increased considerably in South-west Germany. In atmospheric layers higher than about 1.5 km, however, no increase in temperature and humidity can be observed. As a consequence, the energy content for convection in the atmosphere, i.e. updrafts in case of an unstable distribution of e.g. temperature or humidity, grows. “But this makes the potential of thunderstorm formation in the atmosphere grow as well”, says Kunz. And, in fact, thunderstorms and hail events have become more frequent and more intensive in South-west Germany.

By linking the damage data recorded by the SV-Sparkassenversicherung (Savings Bank Insurance Company) to the data measured by the IMK precipitation radar, the scientists identified those hail events between 1997 and 2007 that caused the highest damage in large parts of Baden-Württemberg. According to Kunz, radar data have the great advantage of being highly resolved both spatially and temporally. “However, from the signal received from a height of 1 up to 4 kilometers, no direct conclusions can be drawn with respect to hail on the ground”. The insurance company data reveal the direct consequences of hail events. But they refer to postal code areas and one day only. And only populated areas are taken into account. By combining these data sets, the scientists wish to make use of the advantages of both. They divide Baden-Württemberg into mesh cells of 10 km in size and calculate the time intervals of thunderstorms of a certain intensity with the help of statistical methods. According to these calculations, the region of Stuttgart is endangered most, while hail events in the Rhine valley, above the Black Forest, and in the Swabian Jura are comparatively rare. “The reasons are orographic influences”, explains Kunz: Certain terrain shapes deflect wind flow, such that atmospheric disturbances are enhanced.

Conventional observation systems like simple ground-based measurement stations cannot completely acquire thunderstorms and associated extreme events like hail, squalls, or even tornados. ”This is due to their locally limited extensions”, explains Kunz. That is why measured convection data considering the temperature and humidity close to the ground are even more important. According to Kunz, they exhibit a clear trend for the period from 1974 to 2003: The thunderstorm potential has increased. This is reflected by the annual number of severe hailstorms that also increased during a similar period. An example: In 1986, the number of days with damage amounted to 5. Until 2004, it increased to 34 days.

The scientists involved in the HARIS-CC project make climate calculations in order to find out how the thunderstorm and hailstorm potential will develop in the future. They will transfer the methods developed to simulations of various highly resolved regional climate models that are currently being generated by IMK.
The Center for Disaster Management and Risk Reduction Technology (CEDIM) of Universität Karlsruhe (TH), the Helmholtz Center Potsdam Deutsches GeoForschungsZentrum (GFZ), and Forschungszentrum Karlsruhe (FZK) is an interdisciplinary research center in the field of disaster management. It shall help to better understand natural and anthropogenic risks, to identify them earlier, and to better manage the consequences of disasters. More than 30 scientists from more than 15 institutes of the above institutions are cooperating in projects.