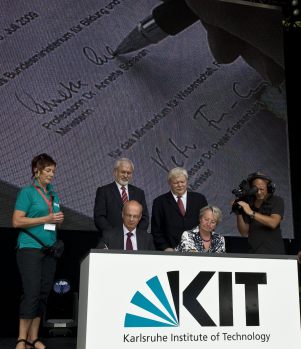 Signature of the KIT Administrative Agreement. (Photo by: M. Breig)

In addition to the KIT Act, the Federal Minister of Education and Research, Annette Schavan, and the Baden-Württemberg State Minister of Science, Research, and Art, Peter Frankenberg, signed the KIT Administrative Agreement on Thursday, July 30, 2009. This document outlines the fundamentals for the further development of the KIT.

This document outlines details of the further development of the KIT, including its increase in responsibility and the overcoming of rigid structures. For example, the KIT is planned to be assigned the authority to award construction contracts. In addition, it is planned to take measures to enhance KIT’s competitiveness in attracting the best experts. Moreover, KIT’s capacity to act rapidly when participating in companies and research institutions as well as when founding subsidiaries in Germany and abroad shall be developed.

The Administrative Agreement was signed by both ministers in the presence of several thousands of KIT employees and students on July 30, 2009, 14.30 hrs. The joint press release of the Federal Ministry of Education and Research and the Ministry of Science, Research, and Art of Baden-Württemberg dated July 30, 2009 can be found under: