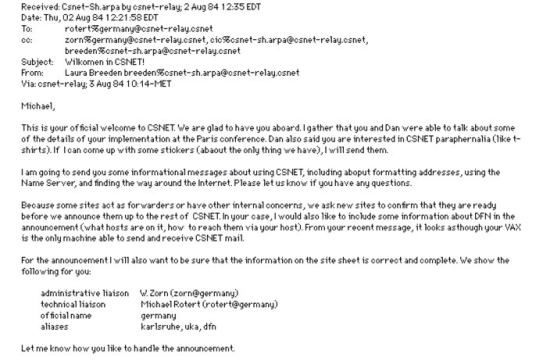 Excerpt from the first e-mail from CSNET received at Karlsruhe on August 3, 1984.

On August 3, 1984 at 10.14 hrs CET, the first e-mail in Germany arrived at the mailboxes of Professor Werner Zorn, Head of the Computer Department (IRA) of the Department of Informatics, and his staff member Michael Rotert. With the words “This is your official welcome to CSNET. We are glad to have you aboard,” the US-American Laura Breeden, staff member of the CSNET Coordination and Information Center at the MIT, Boston, welcomed the new German members of the network. Another important step of the e-mail was made on its way to worldwide success.

E-mails messages had been sent and received in Germany before August 1984, but the message above was the first to be addressed to a separate e-mail server accessible throughout Germany. Up until then, the users had to dial by phone into the American computers. CSNET was a computer network of various US-American universities developed in the 1980s to facilitate communication of computer scientists. By 1984, Germany and Israel were the first nations officially connected to the CSNET.

From August 3, 1984, Professor Zorn, who was responsible for the CSNET service in the domain “germany” (administrative liaison, today: admin-c) and Michael Rotert who supported the CSNET mail server (technical liaison, today: tech-c) could be reached via the mail addresses “zorn@germany.csnet” and “rotert@germany.csnet”, respectively. The first e-mail marked the start of “electronic mailing” in Karlsruhe, a service that is used widely and as a matter of course today. The cornerstone was the project proposal “Interconnection of Networks” submitted by Professor Zorn to the Federal Ministry of Research (BMFT) in late 1982 for an early connection of the planned German Research Network (DFN) to the US-American Computer Science Net (CSNET). On August 3, 1984, nobody could predict that the first connection of China to the international e-mail networks and XLINK, the first German direct internet connection, would follow in 1987 and 1989. And nobody could have suspected Karlsruhe would be elected the German internet capital in 2003 and would still be one of Germany’s IT centers today.

At that time, the economic significance could hardly be estimated and the success with which the e-mail has meanwhile developed to be one of the most important communication media could not be foreseen. “Above all, the CSNET was supposed to facilitate science communication. Of course, we saw an enormous potential in the connection to an international network. But we never expected such a success,” remembers Rotert.

The most important network in the early 1980s, however, was not the CSNET, but the US-American Arpanet (Advanced Research Projects Agency Network) which is considered the precursor of today’s internet. It was initially used for US academic and military purposes exclusively. “Hence, Arpanet was not accessible for us in 1984. The CSNET, by contrast, was a low-cost system for the common public. That is why we concluded a contract with CSNET CIC to get connected to the network,” says Professor Rotert, who presently is the Chairman of the Association of German Internet Companies among others.

As far as the exact time of transmission is concerned, there were misunderstandings in the past. Michael Rotert explains: “Laura Breeden sent the e-mail on August 2 at 12.35 hrs US-American time. It was transmitted to the server CSNET-SH and finally reached the so-called CSNET relay, in which the mails had to be collected first. Then, they had to be fetched manually from there. For this rea-son, we received the e-mail in Karlsruhe on the following day at 10.14 hrs only.”

On Monday, August 3, Professor Rotert will hand the original print-out over to the Karlsruhe City Archive.