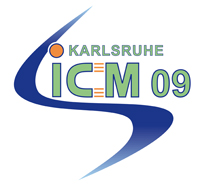 The International Conference on Magnetism (ICM) is the most important international conference for scientists conducting research in the fields of magnetism and magnetic materials. ICM 2009 will take place in Karlsruhe under the auspices of the International Union for Pure and Applied Physics (IUPAP). 1500 scientists from 40 countries will meet from July 26 to 31 at the Kongresszentrum (Stadthalle). Nobel Prize laureates Albert Fert and Peter Grünberg will be present at the press conference on July 27.

It is the second time that the ICM takes place in Germany. Last time, it was held in Munich in 1979. The first ICM Conference on Magnetism was organized in 1958 in Grenoble, France. Since that time, the conference has taken place every three years in various parts of the world. The last two conferences were held in Rome (2003) and Kyoto (2006).

With its 400 oral presentations and 1600 poster contributions, the ICM 2009 will focus on various aspects of magnetism in fundamental research and technical application. Scientific highlights of the conference will be strongly-correlated electron systems and novel effects of spin-dependent electron transport. The latter is a phenomenon, by means of which information might be transported with hardly any losses in future storage media. Apart from magnetic storage materials, the presentations will cover latest developments of magnetic nanostructures, magnetic and photonic materials as well as high-temperature superconductors. In the future, these materials will probably be applied in information processing and energy technology.

Monday, July 27, 13.30 hrs, in the ”Clubraum” of the Stadthalle (Kongresszentrum Karlsruhe).

The press conference will be held in the English language. For registration, please complete the form enclosed and send it back by July 23.

For his research work and the development of novel magnetic storage media, IBM fellow Parkin will be awarded the renowned “Magnetism Award and Néel Medal 2009“ at the ICM 2009. Among the previous recipients of this award are the Nobel Prize laureates Fert and Grünberg in 1994. Three young scientists from Spain and Japan will receive the 2009 Young Scientists Award by IUPAP.

ICM 2009 is organized by the Universität Karlsruhe and Forschungszentrum Karlsruhe that are currently merging to the Karlsruhe Institute of Technology (KIT).

“The large number of participants expected underlines the international significance of the KIT research groups working in the field of experimental and theoretical condensed-matter physics,  in particular magnetism and quantum phase transitions”, says Professor Hilbert v. Löhneysen from the KIT Institute of Physics and chairman of ICM 2009. Professor Konrad Samwer, vice-president of DFG, the German Research Foundation, emphasizes: “We are very pleased to host such an important conference in Germany again and we are particularly happy about the fact that it was agreed on meeting in Karlsruhe that is known for its innovative approaches to science.”

For further information on the ICM 2009 and the program, click www.icm2009.de

All events will take place on the premises of the Karlsruhe Messe- und Kongress-GmbH (KMK). KIT and KMK are cooperating closely even beyond the ICM 2009 project, the objective being to strengthen Karlsruhe as a location of science.