Down with Language Barriers 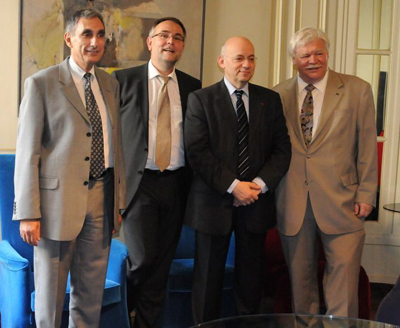 In the future, a team of computer scientists, linguists, sociolo-gists, and ergonomists will work jointly on the development of new language technologies at Paris. The new Institute for Multi-lingual and Multimedia Information (IMMI) was founded by Uni-versität Karlsruhe in early July together with three other Ger-man and French partners.  It focuses on new possibilities of translating language and text for a better communication be-tween cultures.

A telephone conversation of partners speaking different languages and they understand each other in their own language. A dream? This language processing and automatic translation is an objective of IMMI that was now opened by the general directors and presi-dents of the cooperating institutions in the heart of Europe, where more than 20 languages are spoken in direct vicinity.

At IMMI, the strongest European research groups will foster auto-matic translation from text to text, from language to text as well as from language to language. In addition, it will be concentrated on processing multilingual documents and on classifying multimedia documents.
“Communication is among the most important things in the life of any human being,” underlines Professor Alex Waibel from the KIT Insti-tute of Anthropomatics and Deputy Director of IMMI. “Our present life in a globalized world makes us constantly face new challenges. We need innovative and individual solutions to communicate with each other in our networked world at any time. IMMI will make an impor-tant contribution in this respect.”

During the opening, the President of Universität Karlsruhe, Professor Horst Hippler, pointed out that multilingual and multimedia informa-tion processing remains our only possibility to support human com-munication capacity. “However, it is important to better understand also non-verbal communication”, said Hippler. Partners of IMMI are the Universität Karlsruhe and RWTH Aachen University as well as on the French side the National Center of Scientific Research (Centre National de la Recherche Scientifique, CNRS) and the University of South Paris.

The institutions mentioned have been cooperating successfully for many years already. Joint international large-scale projects, such as the multi-media program “Quaero” eventually resulted in the founda-tion of IMMI. Quaero with a project volume of EUR 199 million is a German-French research program. Its 25 partners are developing entirely novel solutions for information access to a practically unlim-ited amount of multi-media and multi-lingual documents that may contain texts, music, language, images or videos.

IMMI is funded by the Quaero Program, the four partners involved, the Departement Esonne, where the Center is built, as well as by the Digiteo Advanced Thematic Research Network. The scientists hope to move into their new building of 3000 square meters in the direct neighborhood of LIMSI, the language laboratory of CNRS, at Paris-Orsay within the coming three years.

The Karlsruhe Institute of Technology (KIT) is the merger of the Forschungszentrum Karlsruhe, member of the Helmholtz Asso-ciation, and the Universität Karlsruhe. This merger will give rise to an institution of internationally excellent research and teach-ing in natural and engineering sciences. In total, the KIT has 8000 employees and an annual budget of 700 million Euros. The KIT focuses on the knowledge triangle of research – teaching – innovation.

The Karlsruhe institution is a leading European energy research center and plays a visible role in nanosciences worldwide. KIT sets new standards in teaching and promotion of young scien-tists and attracts top scientists from all over the world. More-over, KIT is a leading innovation partner of industry.