Professor Caroline Y. Robertson-von Trotha, Director of the ZAK, Is New Member of the Culture Committee of the German UNESCO Commission 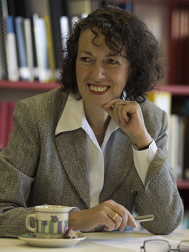 On Friday, January 16, 2009, the Culture Committee of the German UNESCO commission will meet for the first time at Bonn. Among others, medium-term strategies for the protection of cultural diversity will be discussed. Among the participants is Professor Caroline Y. Robertson-von Trotha, director of the ZAK | Center for Applied Cultural Science and Studium Generale of Universität Karlsruhe (TH) and spokeswoman of the KIT competence field ”Cultural Heritage and Dynamics of Change“. The president of the German UNESCO commission has appointed her as member of the Culture Committee for a period of two years.

“It is a great honor and challenge for me to be given the opportunity to participate in this committee. Cultural diversity is a valuable good that deserves our commitment”, underlines Robertson-von Trotha. The Culture Committee counsels the commission with respect to the conservation of cultural heritage, the preservation and enhancement of cultural diversity, and dialog between the cultures. From January, Robertson-von Trotha will contribute her experience in the fields of multiculturality, integration policy, globalization, cultural heritage, and cultural change.

The four committees of education, science, culture, and communication/information advise the organs of the German UNESCO commission in the respective fields. So far, the UNESCO has defined seven conventions to meet cultural concerns. Among them are the Agreement for the Protection of Cultural Assets in the Case of Armed Conflicts (Hague Convention) and the Agreement on the Protection of the Cultural and Natural Heritage of the World (World Heritage Convention). The German UNESCO commission is an organization of foreign cultural and education policy and mediates on the national level between the UNESCO, other institutions involved as well as the public.

With its U40 program to promote young scientists “Cultural Diversity 2030”, the commission addresses young European researchers younger than 40, who wish to participate in UNESCO’s work for the protection and promotion of cultural diversity. In November 2008, the German “Memory of the World” forum was founded to digitize books, scripts, photos, and other types of documentary heritage and, thus, to conserve them and make them accessible.

Prof. Dr. Caroline Y. Robertson-von Trotha is director of the ZAK | Center for Applied Cultural Science and Studium Generale of Universität Karlsruhe (TH). At the KIT (Karlsruhe Institute of Technology), she is spokeswoman of the competence field “Cultural Heritage and Dynamics of Change“ in the competence area of “Technology, Culture and Society“.