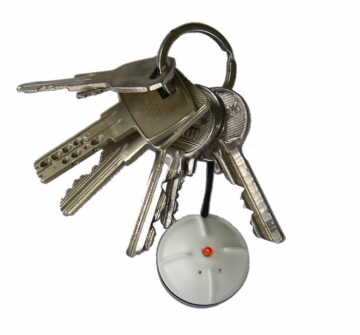 Small and handy: The first-aid sensor is not larger than a walnut
(Photo by: Marc Jäger)

In industrialized countries, cardiovascular diseases are the most common cause of death by far. In Germany alone, about 100,000 persons annually suffer from sudden cardiac arrest. Frequent causes are cardiac infarction, serious injuries in case of an accident or an electric shock. First aiders, however, are often prevented from helping actively due to diagnostic uncertainty. A new “first-aid sensor” is now able to rapidly inform first aiders about the cardiovascular status of the injured.

The sensor developed by scientists from the KIT Institute for Biomedical Technology is not larger than a walnut and fits to any bunch of keys. If the aider applies the sensor to the throat of the patient, the sensor will independently analyze pulse and respiration in order to derive a reliable statement as to whether respiration and the cardiovascular system are disturbed or arrested and the aider has to start reanimation. “Development of our sensor was motivated by the fact that it is decisive for the survival of an unconscious person in emergency situations that laymen immediately identify the life-threatening status and take care of the person correctly”, underlines Dr. Marc Jäger from the Institute for Biomedical Technology, who coordinates the project. “Apart from my work as a scientist, I’m an active firefighter and realized during many traffic accidents that first aiders need support. For this reason, I initiated the project three years ago.” With every minute without Cardiopulmonary Resuscitation (CPR), the probability of survival decreases by 10%. 10 minutes after a cardiac arrest, there usually are hardly any chances of survival.

“Except when preparing for the driving license in Germany, learning of first-aid measures is not compulsory and the knowledge acquired is often rapidly lost with time. According to statistics, only 14% of accidentally present people will dare to reanimate in case of an emergency with a cardiac arrest”, says Jäger. According to him, however, only half of the first aiders are able to correctly take the pulse. As a result, not even every 10th person with a cardiac arrest will be reanimated correctly by an accidentally present first aider. The new sensor system will provide the first aider with a clear decision basis in the important first minutes and will, thus, increase the chance of survival of the patient. 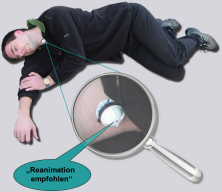 After 10 seconds already does the first-aid
sensor detect the disturbance of respiration
and the cardiovascular system.
(Photo by: Marc Jäger /jl-artdesign / magnifying glass: fotalia)

Ten seconds after attaching the sensor to the throat of the patient already does the new system inform the aider as to whether a “reanimation is recommended” or a “reanimation is not necessary”. Technically, this is achieved by novel non-linear methods that take at the same time the pulse and measure respiration punctually at the throat. Lifting and lowering of the thorax or abdomen during breathing and the blood pulsing in the veins cause periodic mechanical changes on the body surface. Signal acquisition is based on the idea of detecting these minute changes in the uppermost body layers.

Compared to systems available on the market, the new sensor has several decisive advantages. The AED (automatic external defibrillator), for instance, measures the electric signal (ECG), but cannot necessarily determine whether blood actually arrives in the brain. With its average costs of EUR 2000, it is far more expensive. The pulse oximeter very slowly responds to cardiac arrests (several minutes). In addition, the measurement results are no longer reliable in case of a reduced blood circulation in extremities in the state of shock.

The group headed by Marc Jäger has designed the “first-aid sensor” to be mobile and available at low costs. “The costs will be in the single-to-double-digit Euro range”, says the scientist. “It is also important that the sensor is permanently ready for use and can be put into the first-aid box or attached to a bunch of keys.”

At the moment, the system correctly identifies the status of a person in nearly 9 of 10 cases. The scientists from the Institute for Biomedical Technology are undertaking all efforts to considerably increase this rate. The project is funded by the Federal Ministry of Economics and Technology within the framework of the EXIST research transfer program. This funding program supports excellent research-based start-ups that are associated with complex and risky development activities.