First Measurement of Bromine Nitrate in the Stratosphere

This Trace Gas Is of High Relevance to Ozone Chemistry 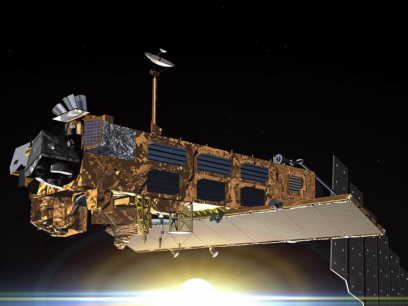 The MIPAS infrared spectrometer on board of the Envisat
European environmental satellite (upper left edge)
(Photo by: ESA)

Scientists of the Karlsruhe Institute of Technology have succeeded for the first time now in measuring the trace gas bromine nitrate in the stratosphere. The measurements were made by the MIPAS infrared spectrometer on board of the Envisat European environmental satellite. After chlorine, bromine is the substance most relevant to the anthropogenically induced destruction of ozone in the stratosphere.

In spite of its far smaller concentration, bromine, after chlorine, contributes most to the catalytic degradation of ozone by halogenated compounds in the stratosphere. The emission of chlorine-containing substances is subject to international agreements. Due to the consequently decreasing chlorine concentration, the role of bromine in stratospheric ozone chemistry is gaining significance. At the same time, bromine has much larger natural sources than chlorine and also reacts much more rapidly with ozone.

Another inorganic bromine compound, bromine oxide, was detected in the atmosphere 20 years ago already. Now, scientists from the Karlsruhe Institute of Technology (KIT) for the first time detected bromine nitrate that represents the major reservoir gas of bromine in the stratosphere.

“The substance was detected by the MIPAS infrared spectrometer that is installed on board of the Envisat European environmental satellite in the orbit. In the highly resolved infrared spectra, we were able to identify the spectral fingerprint of bromine nitrate”, explains Dr. Michael Höpfner from the KIT Institute of Meteorology and Climate Research. “As the signature of bromine nitrate is so weak, the spectra had to be summed up over a period of one month. This first detection of bromine nitrate in the atmosphere was only possible, because we closely cooperate with colleagues in Paris, who measured the necessary reference data at the laboratory.”

Bromine nitrate was detected in the altitude range from 20 to 40 km. The concentrations measured reach up to 25 pptv (25 parts per trillion) during the night. During daytime, they are below 10 pptv. These concentrations and the variation were expected from model calculations: Bromine nitrate is converted into bromine oxide by sunlight.

Bromine has a much higher potential for ozone decomposition than chlorine, because it is converted much more easily from its bromine nitrate (BrONO2) reservoir into an active form by photolysis (under the influence of light) than chlorine from its chlorine nitrate reservoir. In their reservoir forms, both halogen compounds are unable to decompose stratospheric ozone. Only when they are converted into their oxides under the influence of light, do they catalyze ozone decomposition.

The bromine nitrate concentrations measured by MIPAS are in very good agreement with the values expected on the basis of model calculations derived from earlier bromine oxide measurements. Models of stratosphere chemistry are now confirmed and the total content of bromium in the stratosphere can be estimated much better. Bromine enters the atmosphere in the form of long-lived organic compounds from natural and artificial sources on the ground and is transported upwards. Through the tropopause region, it moves up to the stratosphere. According to latest measurements, the known bromine sources are not sufficient to explain the stratospheric bromine concentration.

MIPAS (Michelson interferometer for passive atmospheric sounding) is one of the most important instruments on board of the Envisat European environmental satellite that has been in the orbit since 2002. MIPAS was conceived by the Institute of Meteorology and Climate Research of the Karlsruhe Institute of Technology. MIPAS measures vertical profiles of temperature and, at the same time, of more than 30 atmospheric trace gases. Apart from ozone and water vapor, such trace gases are the atmosphere-relevant nitrogen oxides that determine ozone chemistry among others or various chlorofluorocarbons (CFCs) that release chlorine in the stratosphere under the influence of UV radiation and, thus, attack the ozone layer and also play a role in the greenhouse effect. As MIPAS measures the infrared radiation (thermal radiation) emitted by molecules, it may record spectra both during the day and during the night. The measurements cover the earth from pole to pole. In particular, data are measured during the otherwise hardly accessible polar winter. 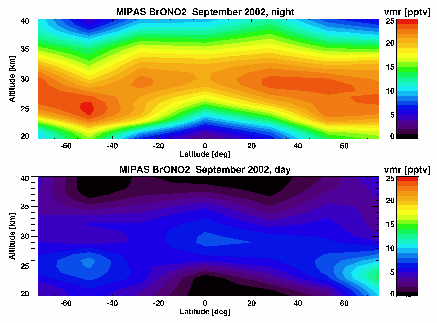