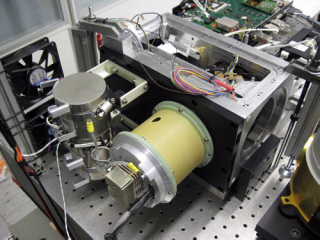 The IMIPAS laboratory instrument of KIT (Photo by: Forschungszentrum Karlsruhe)

Just now, the ESA space agency has announced the candidates for future satellite missions. Three missions have been selected and have good chances of being realized by ESA. Among them is a further development of the MIPAS experiment of the Karlsruhe Institute of Technology, which measures the composition of the atmosphere by recording infrared spectra.

To follow the successful Envisat environmental satellite, the European Space Agency ESA is now planning a series of new satellite missions to study in detail specific aspects of the planet Earth. Some of these missions (Earth Explorer Core Missions) already are under construction. Others shall follow on the basis of a call for proposals started in 2005.

Of the 24 proposals submitted at that time, an expert commission selected the six most promising ones. For each of these six experiments, a group of scientists was asked to perform an advanced study during the past years. In parallel, industrial enterprises were ordered to develop a technical concept for these satellite missions.

In a second selection round at the beginning of 2009, three missions were chosen that fulfill all ambitious goals with respect to scientific objectives and technical feasibility. For these experiments, detailed feasibility studies will be made until autumn 2010.

Among the last three missions selected is PREMIER. Professor Herbert Fischer from the Karlsruhe Institute of Technology (KIT) and Professor Martin Riese from Forschungszentrum Jülich (FZJ) were the leading partners involved in the corresponding study. The main instrument of PREMIER is IMIPAS that represents a further development of the MIPAS experiment of the Karlsruhe Institute of Technology. Forschungszentrum Jülich contributes its expertise in the field of spatially highly resolved remote sounding that is based on the CRISTA experiment of the University of Wuppertal.

“The new instrument can measure climate- and environmentally relevant gases in the sensitive altitude range between 5 and 25 kilometers – this is the upper troposphere and lower stratosphere – at the same time and in so far unknown detail”, explains Dr. Herbert Fischer, head of the KIT Institute of Meteorology and Climate Research, who originally developed MIPAS. “With this mission, we might answer a series of still open questions relating to the chemical composition of the atmosphere and its variation”.

The main objectives of the PREMIER mission are climate research and the investigation of air quality. The mission will focus on the relationship between water vapor in the atmosphere and the greenhouse effect as well as on vertical transports of exhaust gas plumes and biomass fires. The high spatial three-dimensional resolution of the new measurement system will play a decisive role.

A prototype of the new satellite instrument is being developed by KIT in cooperation with FZJ and shall be installed on the HALO research aircraft in the next year already. Like Forschungszentrum Karlsruhe, Forschungszentrum Jülich is a member of the Helmholtz Association of National Research Centers.