News from the Top Quark 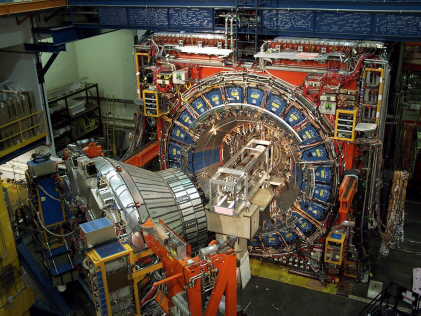 A new formation process of the top quark was discovered at the CDF-II experiment of the Tevatron accelerator in Chicago.

The top quark is the heaviest of all fundamental components of matter, but extremely difficult to detect due to its short lifetime. So far, only pairs of top quarks have been detected. First detection happened 14 years ago at the Tevatron accelerator of Fermilab in the . Now, two groups of international scientists have succeeded at the same time in detecting single top quarks generated by weak interaction. Scientists from the Karlsruhe Institute of Technology were significantly involved in this spectacular discovery in the field of elementary particle physics.

Quarks are fundamental components of matter that compose among others particles in the atomic nucleus - protons and neutrons. The heaviest and last of the six quarks known, the top quark, was detected 14 years ago at the Tevatron particle accelerator of Fermilab near . The process detected at that time always produces top quarks in pairs of quarks and antiquarks by the so-called strong interaction, the interaction of the components of the nucleus. According to the standard model of elementary particle physicists, however, also single top quarks may be produced by weak interaction. This is another fundamental force between elementary particles that acts over very short distances only. Now, two groups of international researchers have succeeded at the same time in experimentally detecting this formation mechanism of top quarks.

A working group from the Institute for Experimental Nuclear Physics of the Karlsruhe Institute of Technology (KIT) was significantly involved in these experiments. Its head, Professor Dr. Thomas Müller, took part in the first discovery of the top quark already. “Since 1995, we have been waiting for the detection of the formation of individual top quarks”, says Müller. “This is one of the rare breakthroughs in experimental elementary particle physics.”

Many physicists hoped for deviations from theoretical predictions. Müller continues: “We know that the so-called standard model must be incomplete. Under extreme conditions, as those prevailing shortly after the Big Bang, it is no longer valid. The standard model only is the boundary case of a more universal theory.”

When physicists speak of a “standard model”, they mean their conception of the world of smallest particles and fundamental forces. Among others it describes the setup of matter that is composed of six different quarks and leptons each and the structure of the forces between them. While the lightest of these particles make up today’s matter, the remaining particles decomposed during the first billionths of a second after the Big Bang already. Their principle existence can only be demonstrated (and, hence, the processes taking place in the early universe can only be understood) at highest-performance particle accelerators. Such accelerators produce e.g. quarks and their antiparticles, anti-quarks, from pure energy according to Einstein’s principle E=mc2. Their decomposition products are then detected in electronic detectors as high as houses.

Interestingly, the reaction discovered now represents an important background for an even rarer particle, the Higgs boson that is also searched for feverishly at Fermilab. This particle that still remains to be discovered is considered the origin of mass of all matter. If may be doubted, however, whether the performance of the accelerator will also be sufficient for this fundamental discovery.

These measurements and, of course, the search for the Higgs boson and possible signals of the mysterious dark matter will be continued in the future at the higher-performance Large Hadron Collider LHC at CERN in . After an unexpected break, the LHC will take up operation again in autumn this year. The KIT Institute for Experimental Nuclear Physics participates in this gigantic research project with a staff comprising 55 members.