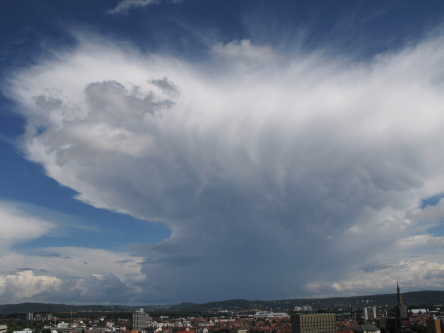 A DFG research group wants to find out why it is often impossible to forecast the
extreme dimensions of a thunderstorm.
(Photo by: Bernhard Mühr)

Time and again, also Central Europe is devastated by severe thunderstorms. The hurricanes Lothar and Kyrill in 1999 and 2007 caused numerous casualties and damage in the amount of billions. During the flooding of the river Elbe in 2002, entire villages had to be evacuated. A better forecast of such weather situations could provide for an early warning of the public and reduce the impacts. This is the mission of PANDOWAE (Predictability ANd Dynamics Of Weather Systems in the Atlantic-European Sector), a research group of the Deutsche Forschungsgemeinschaft (DFG, German Research Foundation).

“More precise numerical weather forecasts may mitigate the threat to man posed by extreme weather events”, says spokeswoman Professor Sarah C. Jones from the Institute of Meteorology and Climate Research of the Karlsruhe Institute of Technology (KIT). Researchers from the universities of Karlsruhe, Mainz, and Rostock as well as from the German Aerospace Center (DLR) at Oberpfaffenhofen wish to contribute to reaching this objective. They try to better understand the processes responsible for extreme weather situations and the factors that aggravate their predictability. “Understanding the causes of errors – this is our objective”, explains Jones. The findings shall be incorporated in better forecast models. According to the spokeswomen of the project, the approach is global: “Influences on our weather may also be generated in the Pacific”. Still, the researchers are aware of the fact that a global data network always has gaps. That is why they are working extensively on an adaptive forecast system. They want to predict where more precise measurements with which methods are required to make more exact predictions.

The researchers focus on weather systems that may cause severe damage: European low-pressure systems, Mediterranean cyclones, strong thunderstorms with hail and storm as well as tropical hurricanes that turn into extratropical low-pressure systems. Examples are the winter storm Kyrill, the Elbe flood or storm tides of the North Sea and Baltic Sea. “So far, these events have often been acquired rather inadequately by numerical weather forecasts”, says Professor Volkmar Wirth from the Institute for Physics of the Atmosphere of the University of Mainz. Sometimes, the data are not sufficient, sometimes models do not represent the data with sufficient precision. To change this, the researchers are active in three fields: They study Rossby wave trains – disturbances in the strong wind zone at about 10 km altitude that may cause marked weather situations. They also analyze processes that accompany phase modifications of water – above all evaporation and condensation – and strongly influence the development of thunderstorms. And they optimize ensemble forecasts by summarizing many forecasts with various initial and boundary conditions: “In this way, we want to compensate errors and gaps of the data and increase the accuracy of our predictions”, explains Dr. George Craig from the German Aerospace Center (DLR) Oberpfaffenhofen. Their findings shall be used by forecast centers like the German Weather Service (DWD), with which close cooperation has been established.

The PANDOWAE project has a duration of six years. Participating researchers come from the KIT, the University of Mainz, the German Aerospace Center in Oberpfaffenhofen, and the Leibniz Institute for Atmosphere Physics (IAP) of the University of Rostock. In addition, the group closely cooperates with the University of Leeds and the Technical University of Zurich, Switzerland. The KIT scientists under the direction of Professor Jones and Professor Christoph Kottmeier concentrate on the influence of tropical thunderstorms on European weather as well as on Mediterranean cyclones. Professors Wirth and Heini Wernli from the University of Mainz study the relationship between Rossby wave trains and heat supply due to the condensation of water vapor and the development of extreme weather events. The IAP scientists headed by Dr. Dieter Peters focus on the relationship between breaking large-area waves and storms. At the DLR, Craig and Dr. Martin Weissmann, among others, work on the improvement of forecasts by specific observations and ensembles. In the first three years, an amount of about EUR 500,000 will be granted annually to the DFG research group.

PANDOWAE is part of the THORPEX research program of the World Meteorological Organization (WMO). In 2008, the group was involved in the planning and execution of an international measurement campaign to improve the prediction of typhoons in the Pacific. THORPEX is aimed at optimizing weather forecasts from one day up to two weeks before an event. “During the period from one to three days, the exact structure and the timing are important. After this, the probability of an event”, says Jones.

Apart from research, the promotion of young scientists is one of the central objectives of PANDOWAE. At summer schools, young researchers exchange experience with each other and with experienced scientists. In this field, PANDOWAE cooperates with the Karlsruhe House of Young Scientists (KHYS).