“KIT Is Being Lived“

Annual Reception of the Karlsruhe Institute of Technology Focused on Research 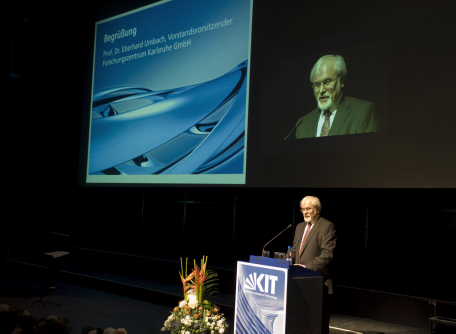 Research was in the focus of the 2009 annual reception of the Karlsruhe Institute of Technology (KIT). It was concentrated mainly on the inseparably linked topics of energy, climate, and environment. The Chairman of the Executive Board of Forschungszentrum Karlsruhe, Eberhard Umbach, drew the bow of highlights from aerosol and cloud research to a novel type of cement that saves energy and is environmentally compatible. The President of Universität Karlsruhe, Horst Hippler, argued for targeted internationalization and cooperative ventures of KIT with strategic partners.

Am KIT-Zusammenführungsgesetz wird noch gefeilt – die beiden Partner Universität und While the law on the KIT merger is still being reviewed, both partners, Universität and Forschungszentrum Karlsruhe, have been cooperating closely and successfully for a long time already. ”KIT is being lived”, said the Chairman of the Executive Board of Forschungszentrum Karlsruhe, Professor Dr. Eberhard Umbach, at the 2009 annual reception taking place at the Konzerthaus Karlsruhe. According to Umbach, this is reflected, for instance, by the fact that several persons are working in both supervisory bodies. As the KIT is striking new paths in research, education, and innovation and bridging the gap between university and non-university research, it is closely watched in Germany and abroad. A number of renowned representatives of politics, science, industry, and society attended the KIT annual reception.

Lord Mayor of the city of Karlsruhe and Chairman of the Executive Board of the Karlsruhe Technology Region, Heinz Fenrich, underlined KIT’s role as a catalyst and innovation partner of industry. According to Fenrich, the city and the region are aware of their benefits from the KIT and both are supporting its further development. This would include an extension of the KIT according to its needs.

Eberhard Umbach presented some highlights of the KIT Centers Energy, Climate and Environment, NanoMicro, and Elementary Particle and Astroparticle Physics. These institutions organize the KIT research competence and represent it to the public. The KIT Energy Center, for instance, covers nearly the complete spectrum of energy research. With about 1100 employees, it is one of the largest energy research centers in the world.

Celitement is a new type of cement developed by Karlsruhe researchers. It saves energy and resources and protects the climate. Like conventional cement, celitement is a hydraulic binder based on calcium silicates. In contrast to conventional binders, however, up to 50% of energy can be saved when celitement is produced, and CO2 emission is reduced by more than 50%. This gives rise to enormous potentials: “At the moment, CO2 emission of global cement production is four times higher than that of worldwide airplane traffic”, reported Professor Umbach. Energy-efficient and low-cost lightweight construction is accomplished using the HEPHAISTOS technology developed by the KIT: Microwaves allow for the production of large formats of carbon fiber-reinforced plastics of highest quality for vehicles or airplanes, for instance.

The AREVA Nuclear Professional School was established recently as the first module of the KIT School of Energy. Here, young engineers and natural scientists will be trained to experts in nuclear technology. Eberhard Umbach underlined the role of nuclear energy in a sound energy mix with a high proportion of energy sources capable of covering base-load consumption. But irrespective of the decision on the further use of nuclear energy in Germany, the need for experts is enormous in both Germany and abroad. According to Umbach, the KIT maintains excellent competence in the field of nuclear technology in Germany and represents a leading institution for the training and qualification of young people. Umbach presented the innovative concept of a light water reactor (HPLWR2) with a potential efficiency of 44%.

The research activities presented at the KIT annual reception also included the KIT-CART Campus Automotive Center, hydrogen research, the AIDA facility for aerosol and cloud research, the MIPAS infrared spectrometer for the measurement of ozone-damaging bromine nitrate, the Pierre Auger experiment to study cosmic rays, 3D laser lithography to produce three-dimensional microstructures and nanostructures from photosensitive materials, a microgrid for computer tomography as well as innovative approaches to genetic research, biomechanics, and morphogenesis research. A number of these projects are carried out with renowned industry partners. In addition, Eberhard Umbach introduced the KIT High-tech Incubator for Spinoffs and the KIT Business Club.

University president Professor Dr. Horst Hippler reported about the vast attention KIT is attracting at top enterprises and elite universities in the USA. Recently, a delegation headed by Hippler was invited to present the KIT innovation culture at Stanford. At the annual reception, Professor Hippler formulated the objectives of KIT internationalization: Cooperative ventures are no ends in themselves, but serve to improve or complement own potentials, generate values added, or enhance visibility. “Strategic partners of the KIT may be identified locally, regionally, Germany- and Europe-wide as well as worldwide”.

The Head of the KIT Atmospheric Environmental Research Division at Garmisch-Partenkirchen, Professor Dr. Hans Peter Schmid, talked about climate change and climate research. “Global patterns of climate change are known except for relatively small remaining uncertainties,” explained Schmid. Schmid pointed out that on the regional scale, climate change mainly affects the water cycle, which is a major field of KIT climate research that links experiments with models of high regional resolution.

Promotion of young scientists is a major concern of the KIT. At the annual reception, Dr. Timo Mappes presented the Young Investigator Network (YIN), of which he is the spokesman. YIN is the network of KIT young investigators groups and administrated by the young investigators themselves.

In the course of the KIT annual reception, Horst Hippler, bestowed the title of “KIT Music Director” on Nikolaus Indlekofer who is presently engaged in establishing the KIT choir and KIT orchestra. Under the direction of Indlekofer, the university choir performed at the reception.