Hunter of Cosmic Knee about to Retire 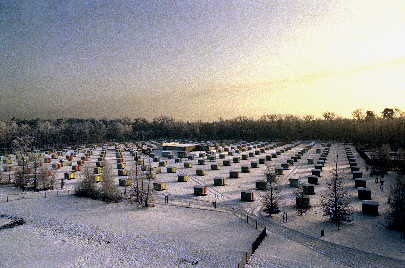 The KASCADE experiment at the Karlsruhe Institute of Technology (Photo by: Markus Breig, Forschungszentrum Karlsruhe)

Since 1995, the KASCADE experiment of the Karlsruhe Institute of Technology has been measuring the composition of cosmic rays. KASCADE and its extended version KASCADE-Grande were the first experiments wordwide to resolve the energy spectrum of these particles from the universe into individual mass spectra. In this way, the international large-scale experiment succeeded in finding out how the mysterious bend in the energy spectrum, the so-called “knee” of cosmic radiation, develops. KASCADE will now be shut down at the end of March. Its successes will be celebrated by an international colloquium on March 30. Representatives of the media are cordially invited.

Cosmic radiation consists of (atomic) particles from the universe that enter the atmosphere of the earth and meet with the gas molecules existing there. This gives rise to showers of secondary and successive particles that propagate in cascades down to the ground, where they are measured with the help of KASCADE. Cosmic rays cover an extremely broad energy range, from very smallest energies up to more than 1020 electron volts. This energy is higher by several orders of magnitude than anything that can be produced by the largest particle accelerators on earth. With increasing energy, the flux of cosmic radiation decreases rather rapidly. Up to an energy of about 1015 electron volts, abundance follows a power law. Above, it drops even more strongly. This is referred to as the knee of cosmic radiation, which is reflected by a “bend” in the energy spectrum.

The Karlsruhe air shower experiment KASCADE (KArlsruhe Shower Core and Array DEtector) measures the high-energy component of cosmic rays in the energy range between 1014 and 1017 electron volts, that is exactly in the range where this “knee” is located. KASCADE was the first experiment worldwide to resolve the energy spectrum of this high-energy component of cosmic radiation into individual mass spectra. This so far most precise measurement of cosmic rays has significantly improved the astrophysical understanding of sources, acceleration, and transport of cosmic particles in our galaxy.

“In the energy range measured, cosmic radiation was found to be distributed homogeneously over the complete section of heaven observed”, summarizes Dr. Andreas Haungs, head of the KASCADE-Grande project of the KIT Institute of Nuclear Physics. “The knee of cosmic radiation results from the fact that the flux of hydrogen nuclei is the first to decrease at energies above four times 1014 electron volts. Then, the flux of helium nuclei also decreases strongly at somewhat higher energies.”

Until 1996, KASCADE was installed on an area of at first 200 m x 200 m on the Northern Campus of the Karlsruhe Institute of Technology. On this area, 252 detector stations are located, in which electrons and myons from air showers are detected. In addition, it is possible to determine the arrival direction of primary particles. In the center of the area, the central detector, consisting of 4000 t of iron and complicated electronic equipment, is located. Here, energy, the direction of incidence, and point of impact of nuclear particles from the air showers are measured. After 2002, KASCADE was extended to KASCADE-Grande with 37 new detector stations on an area of 700 m x 700 m. The measurement range was extended to cover about ten times higher energies and to detect the knee for heavier particles, e.g. iron nuclei.

The measurement phase of KASCADE and KASCADE-Grande is now expiring. Longer measurements would hardly improve the statistics of the results obtained. However, parts of KASCADE will still be used for a certain time as a test experiment for the calibration of novel detectors and measurement techniques.

On March 30, 2009, the active phase of KASCADE and KASCADE-Grande will be completed by an international final symposium. The symposium will start at 10.30 hrs at the Center for Advanced Technological and Environmental Training of Forschungszentrum Karlsruhe, Hermann-von-Helmholtz-Platz 1, 76344 Eggenstein-Leopoldshafen. At 17.00 hrs, the highlight of the day, the closing ceremony, will take place on the KASCADE area in the northern part of Forschungszentrum Karlsruhe. Royal astronomer Professor Sir Arnold W. Wolfendale will speak. The light installation “Cosmic Revelation” of the artist Tim Otto Roth will mark the dramatic end of the event.