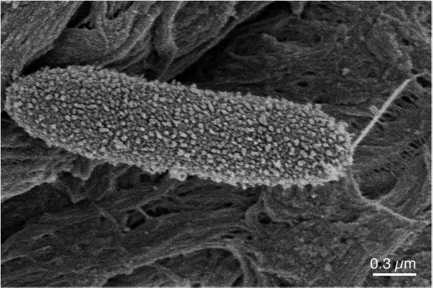 Modified surface: Upon contact with a surface, coated with an antimicrobial miniprotein, small bubbles and bulges developed on the envelopment of a Pseudomonasaeruginosa bacterium.(Photo by: Nelly Panté, University of British Columbia)

Annually, 50 to 100 million people worldwide receive surgical implants. Some 1 to 7% of the patients suffer serious complications due to bacterial infection; therefore, prevention of such implant-associated infections is a high priority. Scientists from the KIT Institute for Biological Interfaces (IBG) have now succeeded in identifying highly active mini protein chains that are good candidates as an anti-bacterial coating of implants (Chemistry & Science, vol. 16, issue 1).

The IBG scientists have developed a new screening method, in collaboration with colleagues from the University of British Columbia. Using this method, a large number of mini proteins can be tested within a short period of time for their ability to repel infection while attached to a surface, such as an implant. These scientists study antibacterial peptides, small or “mini” proteins consisting of a short chain of amino acids. “Antibacterial peptides are fascinating molecules that still hold a number of mysteries”, says Dr. Kai Hilpert, head of a young investigators group at IBG.

These mini proteins, consisting of 12 to 50 amino acids, are of high interest for fighting infections: they can kill both Gram-negative and Gram-positive bacteria, but also fungi, viruses and/or parasites. These mini proteins also assume major functions in the immune system. Although scientists have been aware of their existence since the 1960s, their modes of action remain a mystery, this particularly applies to the short-chain proteins studied by Dr. Hilpert’s team or researchers.

Bacteria are enclosed by a protective layer, which surrounds the cell membrane and is nearly ten times the thickness of the mini proteins themselves. “We can demonstrate that the proteins have an effect on the bacterial membrane, but know at the same time that they do not have direct contact with it”, states Hilpert. At the moment, the IBG scientist and his team are working on the optimization and automation of a screening method that will be used later on to test from 8000 to 10000 substances per week. In this way, the KIT scientists aim to find highly effective substances that prevent infection while directly bound to implant surfaces.