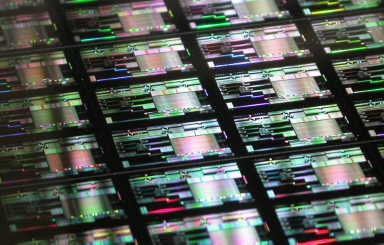 New dimensions in communication are opened up by an ultrafast chip now developed by researchers. (Photo by: Luca Alloatti)

An international team of researchers has developed a chip that is four times more powerful than the previous record holder. It promises a faster internet at lower costs and the processing of larger quantities of image data. The scientists, including four researchers from the Karlsruhe Institute of Technology (KIT), combined organic chemistry with silicon technology. Their success was published in the April issue of Photonics Nature.


The group has “combined the best of two worlds”, outlines Professor Jürg Leuthold from the Institute for Photonics and Quantum Electronics (IPQ). The scientists developed an organic material that combines in a so far unprecedented manner a high optical quality with the capability of transmitting light signals. The international team headed by Leuthold and Professor Wolfgang Freude from Karlsruhe found a technical solution for integrating this material in silicon chip technology, such that it can be used in optical telecommunication systems. Their performance is enhanced enormously: “The chip can process the data of 2.6 million telephone callers”, says Leuthold.

In an experiment, the researchers demonstrated the functionality of ultrafast data processing. By means of the chip, an optical data signal of 170.8 gigabits per second was transcribed into four data flows of 42.7 gigabits per second. Then, these flows were further processed electronically. According to Leuthold, “the speed limits caused by electronics can now be exceeded by a factor of four – and even more -, since the chip processes the data in an optical manner”.

It has been known for years that data can be processed far more rapidly with optical means than electronically. But so far, nobody has succeeded in demonstrating that bit rates far above the sound limit of 100 gigabits per second can be reached with inexpensive silicon. For several years, researchers all over the world have been busy in developing silicon technology. Only recently, Intel announced first optical signal processing of 40 gigabits per second.

The team of Leuthold and Freude have now exceeded this record by a factor of four due to their new approach: In contrast to light-conducting waveguides made by competitors, the light-guiding tracks on their silicon chip have a fine gap in the center. It has a width of just 100 nanometers – a human hair is seven hundred times thicker in comparison. This gap was filled with a novel organic molecule which provided the optical waveguide with ultrafast features. For this purpose, the material was heated up to the vapor phase, in which it was put down onto the silicon structure. Then, the material assumed a homogeneous solid state. In this way, the molecules fill the gap completely and homogeneously and prevent losses due to scattering: “This was the breakthrough”, underlines Leuthold.

According to the researcher from Karlsruhe, the probability is high “that we can continue to use silicon also at highest bit rates”. The success story of silicon that started 61 years ago with the development of the first transistor might be continued: “By modifying silicon in the coming years such that optical signals can be processed at rates beyond the limits feasible with electronics”.