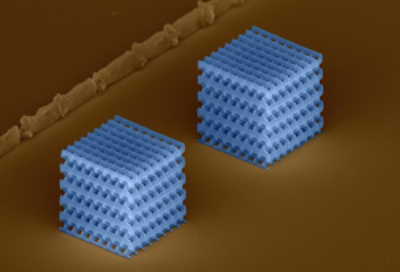 Photonic crystal – an example of CFN research.
(Photo by: CFN)

With a total of about 25 million Euros, the Deutsche Forschungsgemeinschaft (DFG, German Research Foundation) will fund the DFG Research Center for Functional Nanostructures (CFN) at the KIT over the coming four years. This decision was taken after a thorough evaluation by international reviewers in the past months. According to the experts, the Center at Karlsruhe “has assumed a major share in shaping nanosciences and acquired a visible position in a field covered by intensive research and considerable international attention”.

With this decision the third funding period will now commence for the DFG Research Center for Functional Nanostructures (CFN). The CFN was already rated excellent in its 2005 evaluation. Since its foundation in 2001 until 2005, the CFN was funded with 30 million Euros from DFG and state funds. From 2005 to 2008, another 20 million of funds were granted. With its present decision to continue funding until 2013, the DFG acknowledges “the excellence and perfect collaboration of the institutions involved and of the scientists working there”. According to the DFG, the research areas of nano-photonics, nano-electronics, and molecular nanostructures in particular are “brilliant examples of research”.

“Of course, we are very happy about the referees’ praise”, says Professor Martin Wegner from the CFN. “It will be important to expand the CFN into the equally important fields of nano-biology and nano-energy, and to develop these research areas into similar examples of scientific excellence. Moreover, ways will have to be found for the CFN researchers to continue their successful research even beyond the horizon of twelve years.”

Professor Horst Hippler, President of the Universität Karlsruhe, is also very pleased: “The CFN is the flagship in nanosciences in Germany. It is obvious by the scientific success and extraordinary reputation of the CFN that Germany as a place of research has no reason to fear international comparison. But we must not rest on our current laurels. We have to use the current economic crisis as an occasion to increasingly invest in promising fields of research to secure scientific and economic success in the years to come.”