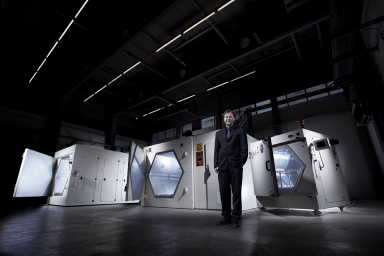 The highly modern HEPHAISTOS test center at the Karlsruhe Institute of Technology.
(Photo by: Forschungszentrum Karlsruhe)

Research conducted by the Karlsruhe Institute of Technology led to the development of the HEPHAISTOS technology. It represents a revolutionary milestone for the future industrial production of lightweight materials for use in aerospace industry as well as automotive engineering. The results are now presented in the book “Energy Efficient Microwave Systems” published by the Springer Verlag (ISBN: 978-3-540-92121-9).

Within the framework of the HEPHAISTOS technology, a first ideal microwave facility was built at the Karlsruhe Institute of Technology (KIT). Its homogeneous field distributions were found and described by novel calculation methods of general relativity theory. Technical work resulted in the development of a modular industrial systems line that is commercialized by Vötsch Industrietechnik, Reiskirchen, under a worldwide license. In 2007, a highly modern HEPHAISTOS test center was established at KIT. Here, processes and systems for use in production are developed in cooperation with industrial companies. By means of microwaves, the HEPHAISTOS technology hardens high-quality light construction materials, in particular carbon fiber-reinforced composites (CFCs) in a cold furnace. In the future, conventional energy-intensive and long-term production processes will be accelerated considerably by this technology. While saving energy, this technology will allow for a breakthrough in the use of large low-cost CFC structures. No autoclaves (containers for the thermal treatment of materials at overpressure) are needed. KIT is a leading institution worldwide in opening up new energy-efficient processes for industrial production.

MIDAS is another systems technology developed by KIT for aviation industry. It will be applied to de-ice airplane wings made of CFC materials. For this purpose, small microwave systems are integrated in the CFC wings. In case of the risk of icing during a flight, these microwaves immediately produce heat at the front edge of the wing.

“This system does not consume much energy and produces no thermal overheating in the CFC structure. During operation, the microwaves do not enter the environment, but are absorbed completely in the closed structure”, explains Dr.-Ing. habil. Lambert Feher, who developed the HEPHAISTOS process at the KIT Institute
for Pulsed Power and Microwave Technology. “The HEPHAISTOS and MIDAS systems are protected by worldwide patents of the Forschungszentrum Karlsruhe.”

Feher’s work with respect to energy efficiency was acknowledged by several awards, last by the 2008 Ricky Metaxas Pioneer Award in Japan for his studies of the coupling of microwaves with water. According to Feher’s book “Energy Efficient Microwave Systems” which will be published by the Springer Verlag in early May 2009 (ISBN: 978-3-540-92121-9), existing ideas relating to water need to be revised. While the classical description by a coupling dipole has been sufficient to describe heating so far, quantum theory has to be used for an exact explanation now. According to quantum theory, water has to be understood as a liquid consisting of substructured quantum droplets that may even have the capability of storing information. Apart from the increasing industrial application of energy-efficient production methods, this will be a focus of intensive fundamental research in the future. Another book entitled “Quantum Electrodynamics” on research activities in connection with Maxwell’s equations and quantum theory is planned by the Springer Verlag. 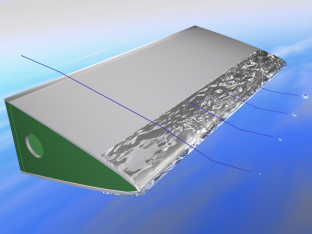 Icing of airplane wings (here a model calculation) is a major safety problem in aviation.
(Photo by: Forschungszentrum Karlsruhe)

By means of the MIDAS technology (Microwave De-/Anti-Icing System) developed by the Karlsruhe Institute of Technology, wings made of CFC materials may be protected from icing.
(Photo by: Forschungszentrum Karlsruhe)

The Karlsruhe Institute of Technology (KIT) is one of Europe’s leading energy research establishments: The KIT Energy Center pools fundamental research with applied research into all relevant energy sources for industry, households, services, and mobility. Holistic assessment of the energy cycle also covers conversion processes and energy efficiency. The KIT Energy Center links excellent competences in engineering and science with know-how in economics, the humanities and social science as well as law. The activities of the KIT Energy Center are organized in seven topics: Energy conversion, renewable energies, energy storage and distribution, efficient energy use, fusion technology, nuclear power and safety, and energy systems analysis.

The Karlsruhe Institute of Technology (KIT) is the merger of the Forschungszentrum Karlsruhe, member of the Helmholtz Association, and the Universität Karlsruhe. This merger will give rise to an institution of internationally excellent research and teaching in natural and engineering sciences. In total, the KIT has 8000 employees and an annual budget of 700 million Euros. The KIT focuses on the knowledge triangle of research – teaching – innovation. It sets new standards in the promotion of young scientists and attracts top scientists from all over the world. KIT is an important innovation partner of industry.