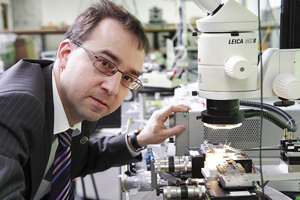 Professor Jürg Leuthold from the KIT Institute for Photonics and Quantum Electronics (IPQ) is granted this year’s State Research Award in the field of applied research. Leuthold conducts research in the field of high-speed data transmission. He has developed an optical silicon chip that is four times more powerful than the previous record holder. This technology allows to process data at a rate of up to 160 gigabits per second – this corresponds to about five DVD motion pictures.

With a total amount of EUR 200,000, the Baden-Württemberg State Research Award is the highest and it is granted to three laureates this year. Of this amount, EUR 100,000 go to the physicist Leuthold.

His KIT Institute for Photonics and Quantum Electronics works in the field of optical communication technology. “We are designing new photonic components that reach the limits of what is presently feasible. Our minute chips have an enormous processing capacity and may process several million telephone calls at the same time”, underlines Leuthold, who now is the first who succeeded in reaching such optical data processing rates on a single silicon chip. 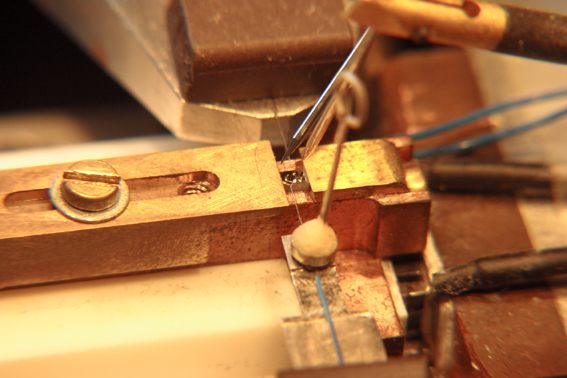 Under the microscope: Holder for the preparation of chips.

In view of the growing number of internet users and interactive web 2.0 applications, data transmission by high-speed glass fiber networks will presumably reach rates of 100 gigabits per second in a few years already. Silicon-based semiconductor chips at the gate of the computer provide for the transmission of these gigantic data volumes. So far, the maximum data processing rate in silicon has been 40 gigabits per second. Leuthold and his team have succeeded in increasing this rate by a factor of four with their development. “The future lies with optical networks. Only they manage to transmit the enormous data volumes to their destination at high speed. Moreover, they are inexpensive and reach the highest energy efficiencies known in this field”, says Leuthold. “We assume that energy consumption of communication interfaces of computers may be reduced by a factor of hundred in this way.”

For five years, Leuthold and his team have been working on the development of the new chip. The breakthrough in the ultrafast transmission rate was reached by the scientists filling the minute gap between the light-guiding tracks on the silicon chip with a novel organic molecule. Now, it is focused on making the chip ready for series production. Two German and an Italian company have already expressed their interest. Further information can be found in the press release entitled Optical Silicon Chip Breaks All Records.

Apart from his research into ultrafast silicon chips, Leuthold is designing routers to switch high-speed networks that manage the data volumes of entire cities. Moreover, Leuthold is studying new transmission systems operated with light energy from glass fibers. For information, see press releases Rapid Delivery and Nothing, but Light.

The physicist has already started to work on a much faster technology to achieve speeds in the range of terabits. “This will give us the possibility to supply users with one gigabit per second. It appears to be very high at the moment”, explains Leuthold. “But ten years ago, nobody would have thought that a normal household would need a connection for 32 megabits per second. The communication bandwidth required mostly is underestimated. Presumably, because future applications are not yet seen and known or because they simply have not yet been invented.”

Since 1989, the State Research Award has been granted annually for fundamental and applied research projects. This year, it is granted to three laureates. So far, about 45 researchers from various disciplines have been granted this award. Science minister Professor Peter Frankenberg will hand over the prize at the Staatsgalerie Stuttgart during a ceremony on June 15.

Jürg Leuthold was born in 1966 at St. Gallen, Switzerland. After studies of physics at the Swiss Federal Institute of Technology (ETH), Zurich, he did research at the Institute of Quantum Electronics of ETH Zurich and published his PhD thesis. Following stays in Japan and the USA, he has been heading the Institute for Photonics and Quantum Electronics of Universität Karlsruhe/KIT since 2004.

Jürg Leuthold was granted several renowned awards, among others the 1999 Lucent President’s Award for Team Excellence and the 2002 Central Bell Labs Teamwork Award. For the development of his optically operated camera network, he and his team were elected among the top five innovators in Germany in the field of optics in 2007. In 2008, Leuthold became fellow of the Optical Society of America (OSA). OSA is the most famous science organization in the field of optics. The title of fellow, however, is granted to very few members of internationally acknowledged excellence only.