So-called random lasers represent an exciting field of current laser research. Using inexpensive materials that can be produced with a low technical effort (powders), a spatially widely scattered emission of laser light is achieved, which is untypical of lasers. Physicists from the Karlsruhe Institute of Technology (KIT) have now determined the exact mechanism of this un-usual type of laser emission. Their results were published in the May issue of the renowned journal Nature Photonics (Nature Photonics 3, 279 (2009)).

A laser is composed of two essential components: A medium that is able to amplify light and a structure that retains the light in this me-dium as long as possible. In conventional lasers this structure typi-cally is a resonator structure that consists of mirror pairs that are as perfect as possible. The resonator guides the light along a precisely given confined path, as a result of which the light can be stored.

A random laser is based on another approach in principle. Here, light is scattered (mostly at the powder grains) along random paths. In case of sufficiently strong scattering, the light can be captured in a limited space. This confinement of light is studied in powders of nanocrystals by scientists of the KIT Semiconductor Optics and Photonics Research Group headed by Professor Heinz Kalt and Professor Claus Klingshirn.

The nanocrystals used are made of semiconducting zinc oxide and have a size of some hundred nanometers (1 nm = 1 millionth of a millimeter). As this size is in the range of the wavelength of light, light is scattered very strongly by the crystals. Such particles are used in e.g. white color, the so-called zinc white, and serve as white pigment. Light cannot penetrate the zinc white, but is backscattered. This results in a white color impression. Something similar happens in salt or sugar, but here the grains are much larger. 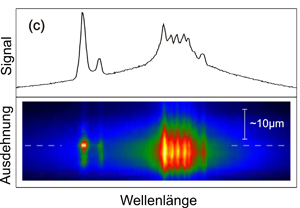 Local origin of laser modes at certain wavelengths. It shows
the degree of light confinement. (Figure by: Applied Phys-ics)

Zinc oxide crystals are not only suited for scattering light. They can also be excited to emit ultraviolet light and to be an amplifying laser medium. In tightly compacted powders of such nanocrystals, the light generated is at first retained in the powder. “Due to the constant random change of direction after scattering by the crystals, the light does not find any rapid way out of the powder”, explains physicist Dr. Johannes Fallert, member of the KIT Research Group and alum-nus of the Karlsruhe School of Optics and Photonics (KSOP). As the light stays longer in the amplifying medium, its intensity is increased drastically before it is emitted from the powder.

Due to the wave character of the light and the resulting interference effects, sharply defined resonances (modes) of laser light can also be generated in a random laser. The occurrence of such modes of a random laser is closely related to the confinement of the light. “Our research group at the KIT has succeeded in gaining major findings with respect to the spatial extension of these modes, i.e. the degree of light confinement, by microscopic spectroscopy”, says Professor Heinz Kalt.

These measurements conclude a long discussion of the exact mechanism of light emission by random lasers. Theoretical work to explain random lasers focused on two models of light confinement: The individual modes are strongly confined (e.g. the path of the laser light covers a few nanocrystals only). According to the second model, the modes are extended (i.e. the light paths stretch over a large area of the powder). The results of the KIT scientists now con-firm that both types of modes can occur simultaneously. Complex interaction between optical amplification by the excited powder and the lifetime of the light mode decides on which type of mode pre-dominates.

The researchers see a high potential for future applications of such random lasers. Enormous amounts of zinc oxide powder are produced industrially and the material is available at very low costs. It is applied in white colors, but also in suntan lotions, ointments, and as a dietary supplement in cattle breeding. Such lasers do not need any expensive precision optics and may be designed flexibly, for instance, as a thin layer system or in a liquid solution. Other advantages of such lasers consist in the fact that UV light emitted by the zinc oxide may be converted into light of any color via a dye and laser light is emitted in a wide spatial angle. This plays an important role in illumination applications.

The Karlsruhe institution is a leading European energy research center and plays a visible role in nanosciences worldwide. KIT sets new standards in teaching and promotion of young scientists and attracts top scientists from all over the world. More-over, KIT is a leading innovation partner of industry.