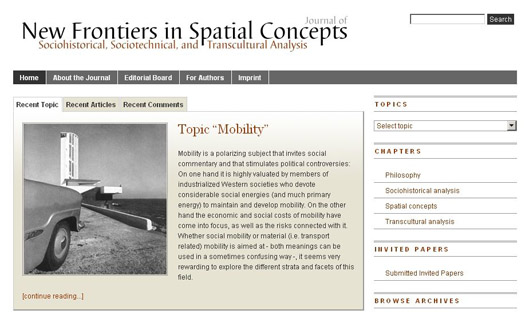 Extreme price increases in the publishing sector over the past couple of years have caused universities to found publishing companies of their own. The Karlsruher Universitätsverlag (Karlsruhe University Press) was founded five years ago. Its first on-line journal, “Journal of New Frontiers in Spatial Concepts,” is a venture into new publishing territories. Representatives of the media are cordially invited to attend the inauguration ceremony at the University Library (Straße am Forum 2) at 4 p.m. on Tuesday, June 9.

Expanding the range of publications from straightforward book production to a scientific e-journal was unique for a university press in this country, says Regine Tobias, head of Karlsruher Universitätsverlag. She and her staff members at the university press, which is a non-profit organization, consistently pursue the open-access concept: research findings financed by public funds are to be made generally available on the internet free of charge and without copyright restrictions.

The “Journal of New Frontiers in Spatial Concepts“ constitutes a platform for research contributions about spaces inhabited by man, and the transformation those spaces undergo as a result of technical and socio-cultural processes. This also includes the virtual spaces of the internet age and the resultant challenges arising to the way people live together.

The idea of the journal came up in discussions with Rolf-Ulrich Kunze, technology historian and author published by the Universitätsverlag, and Ulrich Gehmann, biologist, economist and management consultant. The actual initiating impulse was provided by the interdisciplinary working party, “Formatierung sozialer Räume“ (Formating of Social Spaces), headed by Kunze and Gehmann. The seminar held in cooperation with the Technology History Department within the university course on the History of European Culture and Ideas (EUKLID) is open to students of all faculties. It is within this framework that they discuss the relevance of technology in modern societies of industrial performance, mass mobility and mass communication. The concept of the “Journal of New Frontiers in Spatial Concepts” offers young scientists of the working party a possibility to publish their contributions in English for international discussion. The Editorial Board of the journal, together with an international Advisory Board, provide quality assurance. Time to publication is to be as short as eight weeks. “This combination of teaching, research, and public science, combined with a fast scientific communication channel, is a pioneering project of a type existing only at Karlsruhe,” says Regina Tobias.

The new journal, Tobias explains, had not originated at KIT by chance, but continued the tradition of transdisciplinary and interdisciplinary reflection about the importance of technology to society at the Karlsruhe location. This is represented, for instance, by modern historian Franz Schnabel; technology philosopher Simon Moser; sociologist Hans Linde; philosopher Hans Lenk; and philosopher and sociologist Günter Ropohl.

The open-access movement is a response by universities and scientists worldwide to the “crisis of science journals,” the marked price increase by more than 10% annually of scientific journals from the mid-nineties on. Open access means that scientific findings financed by the public must be generally accessible on the internet free of charge.

At the Karlsruhe Universitätsverlag, this means that this easy and fast production will allow interested readers all over the world to find the publications by Karlsruhe scientists on the internet quickly and at no cost. Upon request of the author, the publisher in addition offers a low-cost printed-on-demand version. The publisher offers Karlsruhe scientists professional, uncomplicated handling of book projects by competent partners on the spot. The Karlsruhe publishing concept has produced 500 publications so far.

For more detailed information, see Universität Karlsruhe as well as e-journal on the internet.

The Universitätsverlag will celebrate the creation of its
e-journal in a ceremony to be held at the auditorium of the new university library building (Straße am Forum 2, 3rd floor) starting at 4 p.m. on Tuesday, June 9. Representatives of the media can register for the press conference by the attached form.

The program of the inauguration ceremony: