Clouds played an important role in the history of climate 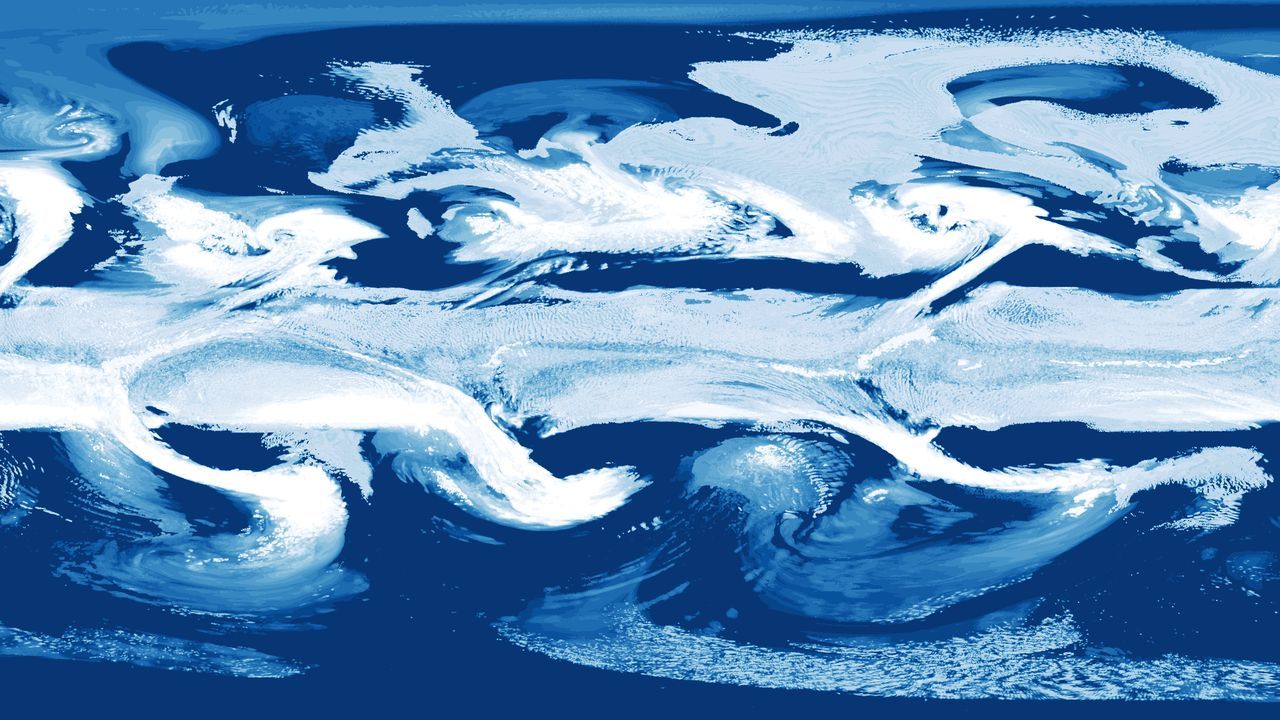 Were Earth’s oceans completely covered by ice during the Cryogenian period, about 700 million years ago, or was there an ice-free belt of open water around the equator where sponges and other forms of life could survive? Using global climate models, a team of researchers from Karlsruhe Institute of Technology (KIT) and the University of Vienna has shown that a climate allowing a waterbelt is unlikely and thus cannot reliably explain the survival of life during the Cryogenian. The reason is the uncertain impact of clouds on the epoch’s climate. The team has presented the results of its study in the journal Nature Geoscience (DOI: 10.1038/s41561-022-00950-1).

Viewed from space, Earth may have looked like a giant snowball during the global ice ages of the Cryogenian period. In the geosciences, this hypothesis that the oceans were completely frozen over has become established as the Snowball Earth theory. But it’s still not clear how sponges, which are found in the fossil record, were able to survive in the very cold Snowball Earth climate. To explain that, some scientists have proposed the alternative theory of an ice-free equatorial waterbelt.

Life in spite of oceans that were probably icebound

Working with colleagues from the University of Vienna, researchers at KIT used global climate models and an idealized energy balance model to investigate Cryogenian climatic conditions. They expected to find a waterbelt in their simulation scenarios and wanted to investigate the conditions under which it would remain stable. “We were surprised to find that this state wasn’t stable in the models,” says Christoph Braun from KIT’s Institute of Meteorology and Climate Research – Department Troposphere Research (IMK-TRO). This means life during the Cryogenian was probably subject to the harsh evolutionary conditions of globally icebound oceans.

The study resulted in new insights into the role played by clouds. “Clouds reflect radiation, and that’s important for the stability of a waterbelt. This strong influence was unknown until now,” says Braun, a PhD student and lead author of the study. With the cloud reflectivity mechanism proposed in the paper, the results of previous studies could be reinterpreted and possibly combined to yield a more coherent picture.

Clouds have had a  strong influence on glaciation throughout Earth’s history. The simulation shows a snapshot of cloud cover in the lowest layer of the atmosphere (up to approx. three kilometers above the Earth’s surface) in an assumed waterbelt climate state. The color scale ranges from no cloud cover (dark blue) to completely overcast (white) (graphic: IMK-TRO).

Clouds complicate our view of past climate

“With the global climate models and an idealized climate budget model, we can show the effects of cloud reflectivity and explain the underlying processes,” says Braun. “But that doesn’t enable us to assess how reflective clouds were in the Cryogenian, because there’s considerable uncertainty about the simulation of clouds in global climate models.” The efficiency with which water droplets are converted into ice is crucial to reflectivity and depends in part on the type and amount of aerosols that can act as ice nuclei. These processes play out on scales of millimeters, while the computational grids used in the models thus far have scales on the order of more than 100 kilometers. The results show that clouds are crucial to the prediction of climate changes and to our understanding of the dynamics of glaciation over geological time. “Clouds don’t just make it harder for us to see into the future, but also to look back into the past,” says Braun.

Assessing habitability of planets outside the solar system

In the future, the researchers’ findings could be useful in assessing whether planets outside our solar system are habitable. “This could be of interest when future observations with the James Webb Space Telescope make it possible to glimpse clouds in the atmospheres of extrasolar planets,” says Braun. The KIT researchers performed their simulations with the Mistral supercomputer at the German Climate Computing Centre in Hamburg. “In our next step, we have begun to simulate clouds under Cryogenian climatic conditions using finer computational grids so that we can investigate whether and how the uncertainties involving the clouds can be reduced,” says Braun.

The German Research Foundation funded the research project, which ended in May 2022, with 202,000 euros over three years as part of its project entitled “Is the Jormundgand hypothesis a possible alternative explanation for the Neoproterozoic glaciations?” The ICON atmosphere model was used for the simulations; KIT was involved in its development as part of a consortium with the Max Planck Institute for Meteorology and the German Meteorological Service. (afr)

More information on the KIT Climate and Environment Center: https://www.klima-umwelt.kit.edu