For the First Time, Researchers Study the Behavior of a Catalyst for Water Electrolysis on the Atomic Level 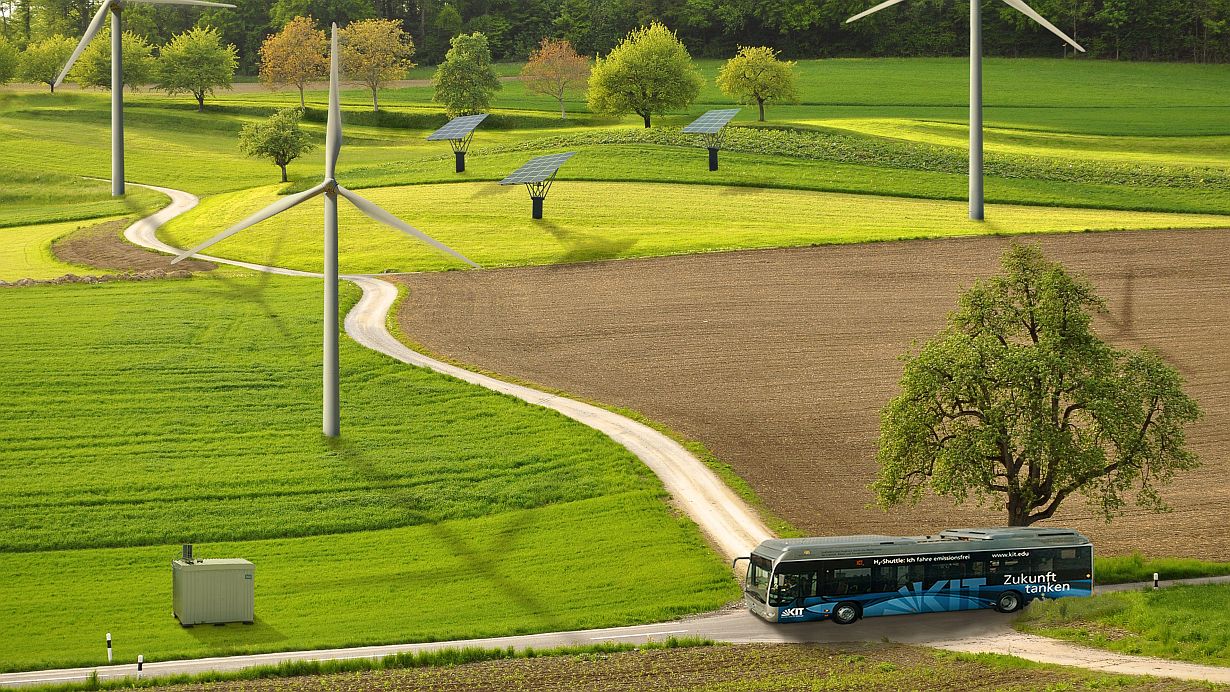 Green hydrogen is a hope for the energy transition. Successful use, however, requires detailed understanding of its production processes. (Photo: Pascal Armbruster, KIT)

Hydrogen produced from renewable energy sources with the help of electric power is deemed a key to the energy transition: It can be used to chemically store wind and solar energy in a CO2-neutral way. At Karlsruhe Institute of Technology (KIT), researchers have studied water electrolysis processes on the surface of an iridium oxide catalyst. Their research for the development of better and more efficient catalysts is reported in the American Chemical Society’s journal ACS Catalysis. (DOI: 10.1021/acscatal.1c02074)

Using energy from solar modules and wind turbines, water can be split by electrolysis into its constituents hydrogen and oxygen without producing any dangerous emissions. As the availability of energy from renewable sources varies when producing green, i.e. CO2-neutral, hydrogen, it is very important to know the behavior of the catalysts under high loading and dynamic conditions. “At high currents, strong oxygen bubble evolution can be observed on the anode, which aggravates measurement. It has made it impossible so far to obtain a reliable measurement signal,” says the first author of the study, Dr. Steffen Czioska from KIT’s Institute for Chemical Technology and Polymer Chemistry (ITCP). By combining various techniques, the researchers have now succeeded in fundamentally investigating the surface of the iridium oxide catalyst under dynamic operation conditions. “For the first time, we have studied the behavior of the catalyst on the atomic level in spite of strong bubble evolution,” Czioska says. The American Chemical Society (ACS) considers the importance of KIT’s publication to the international community to be high and recommends it as the ACS Editor’s Choice.

For catalysis, researchers from KIT’s ITCP, the Institute of Catalysis Research and Technology, and the Electrochemical Technologies Group of the Institute for Applied Materials combined X-ray absorption spectroscopy for the highly precise investigation of modifications on the atomic level with other analysis methods. “We have observed regular processes on the catalyst surface during the reaction, because all irregularities were filtered out – similar to slow speed shooting on a road at night – and we have also pursued dynamic processes,” Czioska says. “Our study reveals highly unexpected structural modifications connected to a stabilization of the catalyst at high voltages under dynamic loading,” the chemist adds. Iridium oxide dissolution is reduced, the material remains stable.

Findings Will Contribute to Better and More Efficient Catalysts

Understanding of the processes on the catalyst surface paves the way to further investigation of catalysts at high electric potentials and will contribute to the development of improved and more efficient catalysts meeting the needs of the energy transition, Czioska points out. The study is part of the “Dynakat” priority program funded by the German Research Foundation. This collaboration of more than 30 research groups from all over Germany is coordinated by Professor Jan-Dierk Grunwaldt from ITCP.

Green hydrogen is deemed an environmentally compatible chemical energy storage material and, hence, an important element in the decarbonization of e.g. steel and chemical industries. According to the National Hydrogen Strategy adopted by the Federal Government in 2020, reliable, affordable, and sustainable production of hydrogen will be the basis for its future use.