The Entrepreneur, Donor, and Patron Visited the KIT for the Ceremonial Presentation of the Certificate 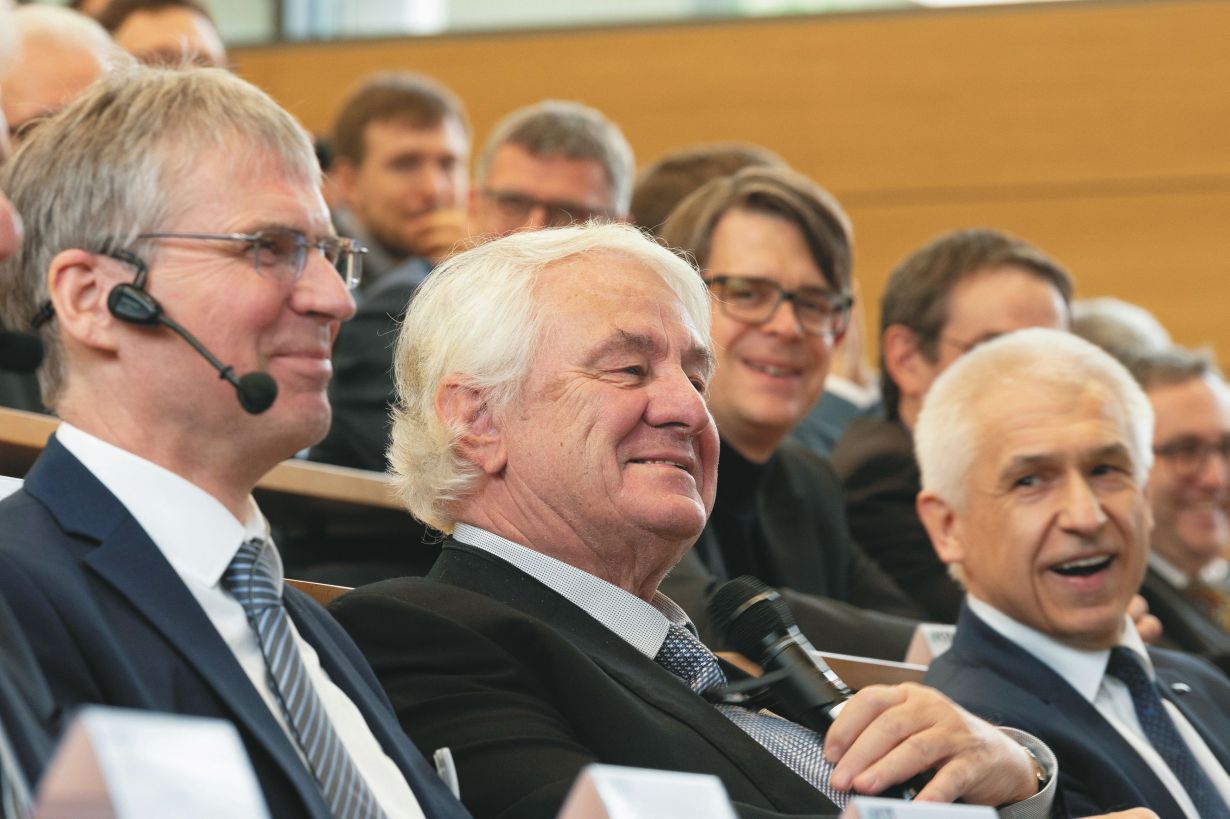 He funds future-oriented research as well as education and cultural work, combines economy and science, supports young talents, and, time and again, develops innovations to push digitalization: Hasso Plattner, co-founder of SAP SE and alumnus of Karlsruhe Institute of Technology (KIT). Recently, he was granted the honorary doctorate by the KIT Department of Electrical Engineering and Information Technology

“Hasso Plattner not only is one of the most successful entrepreneurs and one of the most highly committed sponsors of startups in Germany, he also is a pioneer and mastermind, who realized the importance of digitalization to science and society at an early point in time and has been pushing it intensively since then,” says the President of KIT, Professor Holger Hanselka. “With his outstanding commitment, he is shaping the future. I am very happy to honor him, a renowned innovator, with an honorary doctorate.“

Plattner looks back with pleasure on his studies in Karlsruhe: “Here, I obtained my basic knowledge that has helped me develop new innovations and ideas to date,” he says. “To be successful and competitive, we should never stop apply latest research results in practice. For this reason, I consider it very important to support today’s young researchers. And work should be fun, too. If we have fun, we will achieve more.“

In 1968, Hasso Plattner received his diploma in communications engineering at the Department of Electrical Engineering of the then University of Karlsruhe (TH), today’s KIT. He studied with Professor Karl Steinbuch, who is still deemed one of the pioneers of German computer science. Then, Plattner took up work as a program developer at IBM Deutschland in Mannheim. Four years later, he established the software company SAP (System, Applications & Products in Data Processing) together with Dietmar Hopp, Claus Wellenreuther, Hans-Werner Hector, and Klaus Tschira. Today, SAP SE in Walldorf/Baden-Württemberg is the global market leader in software-related services for enterprises.

Apart from his career in industry, Plattner also worked in the science sector. In 1994, he became visiting lecturer for business informatics at the University of Saarbrücken. Since 2004, he has been visiting lecturer at the University of Potsdam and member of the board of trustees of Stanford University. In 2016, he was granted the Heinrich Hertz Guest Professorship by KIT and the KIT Freundeskreis und Fördergesellschaft e.V. In 1998, Plattner established his own research institute in Potsdam, the Hasso Plattner Institute for Digital Engineering (HPI). Work there focuses on training internationally competitive young executives, who are to shape and advance the digital world.

“Hasso Plattner has used his high intelligence not only for himself, but also for the development of SAP,” said Dietmar Hopp, also alumnus of KIT and co-founder of SAP, in his laudation at the ceremony. “His practice-oriented way of thinking has always made him anticipate change and, hence, the mastermind of SAP software development.“

“Hasso Plattner is a highly successful businessman, who also lives up to his social responsibility. This makes him not only an impressive person, but also a role model and motivation for the younger generation,” says Professor Fernando Puente Léon, Dean of the KIT Department of Electrical Engineering and Information Technology. Together with Professor Jürgen Becker, Head of the Institute for Information Processing Technology, he initiated conferral of the honorary doctorate to Hasso Plattner.