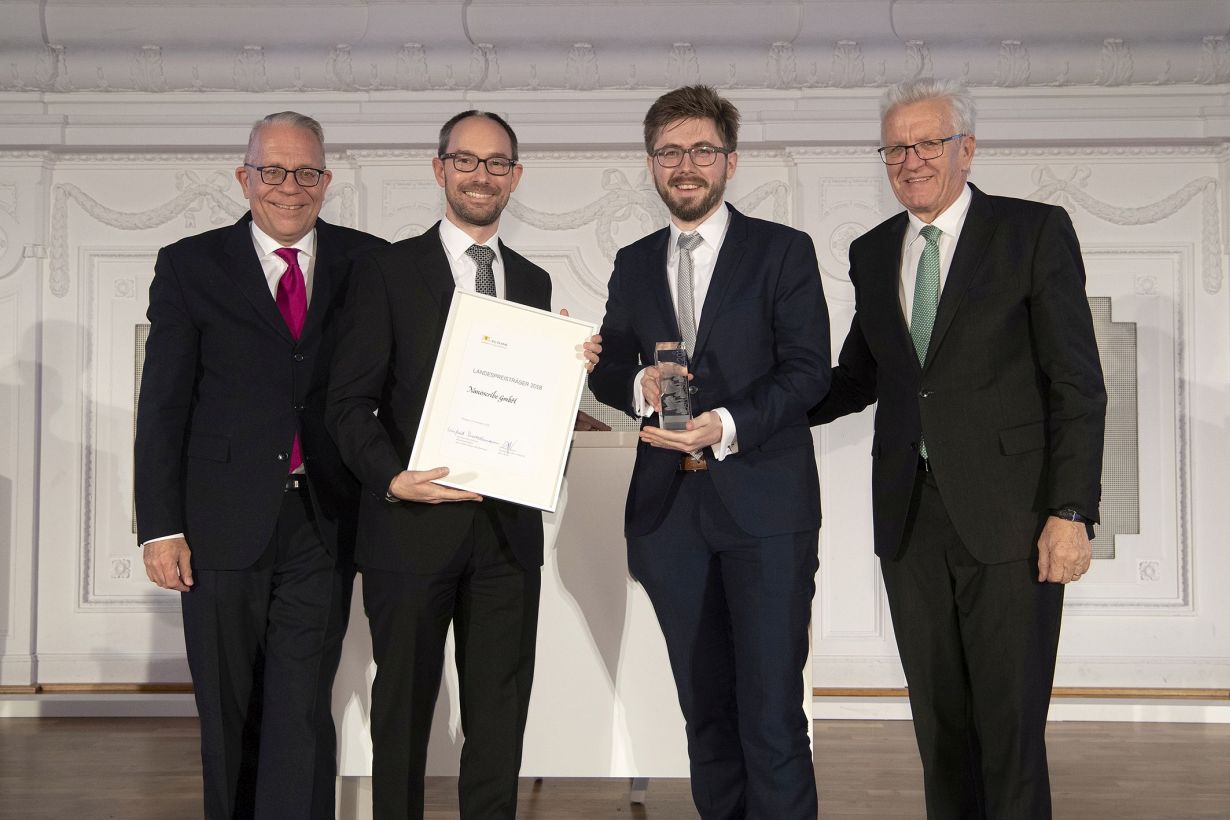 Nanoscribe GmbH, a spin-off from Karlsruhe Institute of Technology (KIT), is the winner of the state award for young companies presented by the state of Baden-Württemberg and L-Bank. At a ceremony in the New Palace in Stuttgart, Minister President Winfried Kretschmann presented the young company with the award last night. First prize is worth 40,000 euros. A total of 375 candidates from all over Baden-Württemberg applied for the award.

“Nanoscribe GmbH is one of the most innovative and successful spin-offs from KIT,” says the President of KIT, Professor Holger Hanselka. “The founders of the company developed a revolutionary high-precision 3D printing process at KIT, which allowed them to become the world market leader with millions in sales in next to no time. The fact that Nanoscribe has now emerged as the winner of the competition carried out by the state of Baden-Württemberg and L-Bank is further evidence of KIT’s innovative strength.”

Nanoscribe, manufacturer of 3D printers for high-precision microfabrication, convinced the jury with entrepreneurial successes and extraordinary innovations. While at the time of its spin-off from KIT the company itself was at the forefront of commercializing a new technology – two-photon polymerization – the market and technology leader’s high-tech devices are now enabling universities, science institutes and industrial companies to do pioneering work. Especially in medical and communication technology, photonics and micro-optics, this technology is the key to developing applications that so far had not been feasible with other methods.

Nanoscribe Managing Director Martin Hermatschweiler had this to say last night (November 8, 2018) after the award ceremony: “After receiving various product awards, today we are very excited to hold the Baden-Württemberg state award for entrepreneurial achievements in our hands. Our state has a young, thriving startup scene which gets valuable support from many sides. We would therefore like to thank KIT and Carl ZEISS in particular for supporting Nanoscribe so professionally and comprehensively from the very first concept.”

Nanoscribe was founded by Martin Hermatschweiler, Dr Michael Thiel, Professor Martin Wegener and Professor Georg von Freymann. Initially emerging from a scientific niche, the spin-off which separated from KIT in 2007 has now established itself as a world market and technology leader, employing more than 65 people today. For years it has posted double-figure millions in sales, with well over 1,000 scientists using the high-tech printers at renowned universities and research institutes worldwide. Its course has been set for the future: after opening a subsidiary in Shanghai (China) this summer, another one will follow in the US. For the end of 2019, Nanoscribe also has plans to move into the new ZEISS innovation hub which is currently being built just outside KIT Campus North.

The state award for young companies is organized jointly by the state government and L-Bank every two years. Minister President Winfried Kretschmann is the patron of the competition. The aim is to find economically successful companies from all industries based in Baden-Württemberg which make an exemplary contribution to a sustainable society through responsible entrepreneurial behavior. The state award for young companies, presented for the twelfth time in 2018, is one of the most prestigious and valuable business awards in the whole of Germany. This year, 375 candidates from all over Baden-Württemberg applied for the award.