Power-to-Liquid: 200 Liters of Fuel from Solar Power and the Air’s Carbon Dioxide 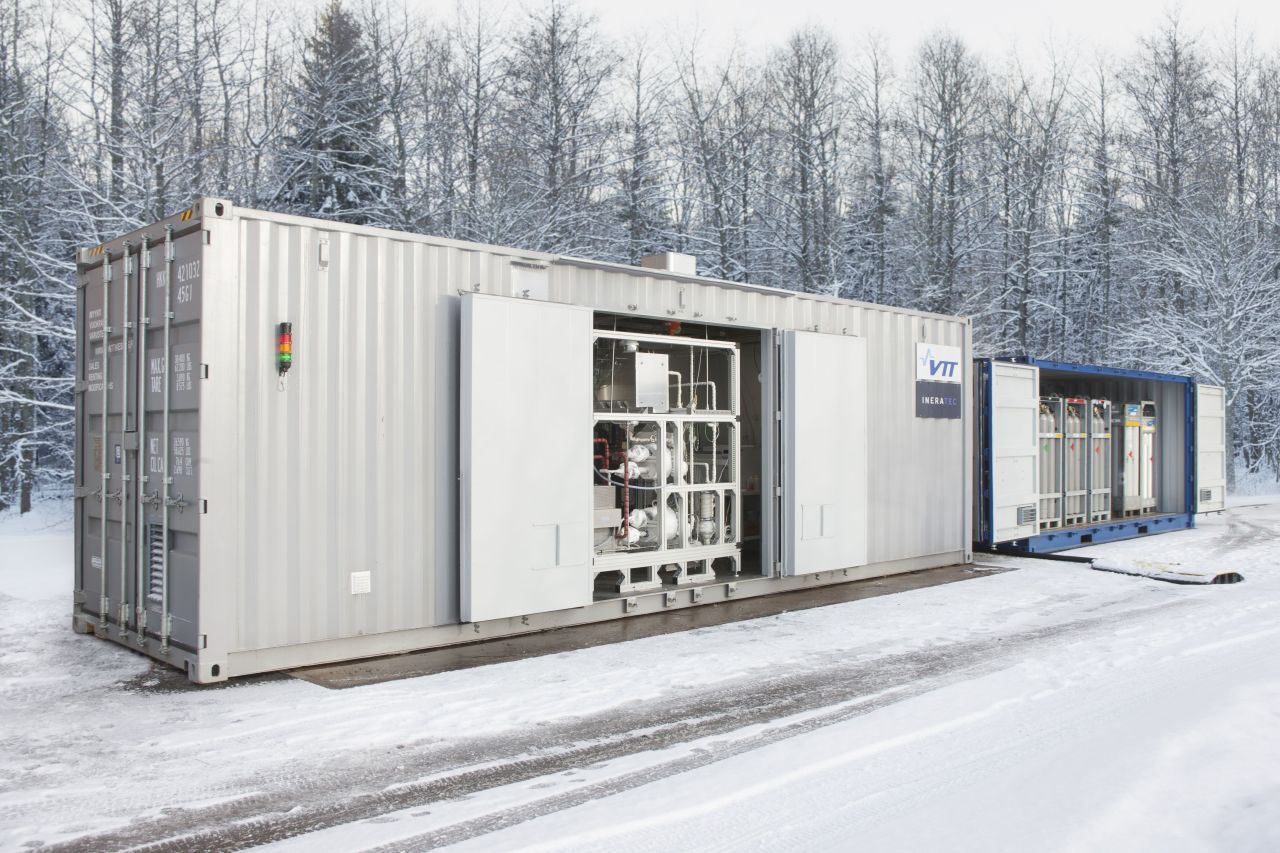 The compact pilot plant used in the SOLETAIR project is designed for decentralized production, fits into a shipping container, and can be extended modularly. (Photo: VTT)

Production of liquid fuels from regenerative electric power is a major component of the energy turnaround. The first 200 l of synthetic fuel have now been produced from solar energy and the air’s carbon dioxide by Fischer-Tropsch synthesis under the SOLETAIR project. Here, INERATEC, a spinoff of Karlsruhe Institute of Technology (KIT), cooperates with Finnish partners. The mobile chemical pilot plant that can be used decentrally produces gasoline, diesel, and kerosene from regenerative hydrogen and carbon dioxide. It is so compact that it fits into a shipping container.

The SOLETAIR project started in 2016. This summer, a decentralized plant network was established. It consists of three components. The “Direct Air Capture” Unit developed by the Technical Research Center of Finland (VTT) captures carbon dioxide from air. An electrolysis unit developed by Lappeenranta University of Technology (LUT) uses solar power to produce the required hydrogen. Afterwards, carbon dioxide and hydrogen are first converted into reactive synthesis gas at high temperature and then into liquid fuels in a microstructured chemical reactor. This reactor, the core of the plant, was developed by KIT and extended to a compact plant commercialized by INERATEC. For the first time, the complete process from photovoltaics and capturing carbon dioxide from air to fuel synthesis has been set up to demonstrate its technical feasibility.

The pilot plant has a production capacity of up to 80 l of gasoline per day. In the first campaign now completed, about 200 l of fuel were produced in several phases to study the optimum synthesis process, possibilities of using the heat produced, and product properties. The compact plant is designed for decentralized production, fits into a shipping container, and can be extended modularly.

In June 2017, the plant network was opened officially by Jamie Hyneman. Hyneman is honorary doctor of the project partner LUT and hosts the “MythBusters” science television series. The special effects expert is entrepreneur, innovator, and patent holder himself. His program has contributed significantly to making science and engineering more popular. The US American develops safety technologies for industry and the public space. When opening the SOLETAIR pilot plant, he impressively demonstrated the improved combustion and ignition properties of the synthetic fuel produced compared to conventional fuel. For the cut-together video on the opening and demonstration, click:

INERATEC GmbH is a spinoff of KIT and develops, builds, and commercializes compact chemical facilities for gas-to-X and power-to-X applications. The spinoff is supported under the EXIST research transfer program of the Federal Ministry for Economic Affairs and Energy. Last week, INERATEC won the third prize in the category of “Emission Reduction, Processing, and Separation” in the Baden-Württemberg 2017 competition for the Environmental Technology Award.

Under the national research alliances of “Energy Lab 2.0” and “Neo-Carbon Energy,” KIT, INERATEC, and VTT intensify their cooperation for the investigation and development of innovative energy systems based on renewable energy sources, novel storage technologies, and the conversion of renewable power into chemical energy carriers. Together with other project partners, KIT and INERATEC also study decentralized production of high-quality synthetic fuel from air and renewable power under the “Power-to-X” Kopernikus project funded by the Federal Ministry of Education and Research.

“The energiewende will only be a success, if we pool our know-how and jointly strengthen the competencies of European industry in the energy sector,” VTT scientist and SOLETAIR project head Dr. Pekka Simell says. “In this respect, innovative startups, such as INERATEC, play a key role,” Professor Roland Dittmeyer, Head of KIT’s Institute of Micro Process Engineering, adds.

This summer, the power-to-liquid pilot plant was built on the LUT campus and connected to the solar power plant there. The SOLETAIR project will expire in mid-2018 and is funded with EUR 1 million by the Finnish Funding Agency for Technology and Innovation (Tekes). Information obtained in the course of the project will be used for the commercialization of the technology. This will give rise to new business models for the more efficient utilization of local surpluses of renewable power, heat use concepts, use of carbon dioxide, or decentralized synthesis of chemical fuels and interim products. In future, the process may essentially contribute to reducing carbon dioxide emissions of traffic.

Videos of the opening ceremony: