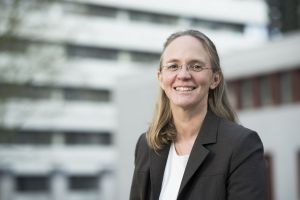 The German Research Foundation (DFG) has fully exculpated Professor Britta Nestler of Karlsruhe Institute of Technology (KIT) and Karlsruhe University of Applied Sciences from alleged scientific misconduct. Therefore, an award ceremony will be held at the annual DFG meeting in Halle tonight where the Gottfried Wilhelm Leibniz Prize 2017 will be conferred belatedly upon Britta Nestler. The awarding of the most important German research prize had been halted in March after anonymous hints in conjunction with Britta Nestler’s research work had been disclosed to DFG at extremely short notice prior to the ceremony. As a result of an intensive review conducted by DFG that also involved external experts, the allegations now proved to be absolutely untenable.

The general secretary of DFG and chairwoman of the committee to investigate allegations of scientific misconduct, Dorothee Dzwonnek, said: “Based on this intensive review, there is no evidence for any scientific misconduct by Mrs. Nestler. So DFG has the great pleasure to finally award her the Leibniz Price now.”

“I am very happy with being awarded the Leibniz Prize belatedly,” Professor Britta Nestler explains. “Now, there is proof that the allegations made wrongly against me and my research work are absolutely untenable. An intensive review by DFG cleared up all charges point by point; nothing has remained,” Britta Nestler adds. The mathematician and physicist considers today’s award ceremony of the most renowned German science prize, which is worth EUR 2.5 million, a recognition of her work that makes her explore new paths by pooling expertise from materials science and software technology.

“Professor Britta Nestler most successfully conducts interdisciplinary computer-aided materials research and is among the top scientists in her discipline,” says the President of KIT, Professor Holger Hanselka. “In 2001, she was Germany’s youngest professor and since then has been granted a number of prizes including the State Research Award of Baden-Württemberg in 2007. We never had any doubt as regards her absolute personal integrity and I am happy that this was confirmed to the full extent by DFG. We are very proud to have Britta Nestler as a researcher and teacher at KIT.”

“The career of Britta Nestler is a success story,” says Professor Oliver Kraft, Vice President for Research of KIT. “I know Britta Nestler as an excellent and highly committed scientist who has largely influenced her discipline in Germany. The fact that she has been fully exculpated of all allegations now and can, at last, accept the most important funded research award, is a great joy for me,” adds Professor Kraft. “My deepest respect goes to Britta Nestler herself who, with great aplomb, contributed largely to the DFG review of the various allegations – despite the situation of emotional turmoil that she was experiencing due to the fact that she was exposed to absolutely unjustified accusations – as probably everybody will be able to imagine. What I deem to be particularly malicious is the time when these accusations were uttered. This was simply meant to get as much attention as possible and to prevent Britta Nestler from enjoying her well-deserved award.”

Britta Nestler reserves the right to consider legal action against the wrongful allegations.

The scientist not only works as a teacher and researcher at Karlsruhe Institute of Technology where she is a member of the collegiate management of the Institute for Applied Materials. Since 2001, she holds a professorship at the Karlsruhe University of Applied Sciences, and since 2008, she is director of the Computational Materials Science and Engineering department at the Institute of Materials and Processes there.

“The Leibniz Prize is another proof of Britta Nestler’s excellent research achievements in an innovative, computer-aided materials research environment that has been shaped by her, and her career is a unique success story,” says Professor Markus Stöckner, Prorector for Research, Technology Transfer, and Quality Management at the Karlsruhe University of Applied Sciences. “The reason why she can conduct this research at both Karlsruhe higher education institutions is also due to the joint efforts by the state of Baden-Württemberg, KIT, and Karlsruhe University of Applied Sciences, who managed, by additionally appointing her to KIT in 2010, to make her stay with the city and the state.”

The Research of Britta Nestler

How does the microstructure of a material evolve during manufacturing processes, such as casting or rolling of metal sheets? What is the influence of heat or mechanical stress on the service life of materials, e.g. in power plant boilers or solar facilities? To answer these questions, Britta Nestler studies the microstructures of materials by means of computer-aided simulation. Through these computer simulations, the scientist gains insight into processes that could not be visualized before. By combining disciplines, she succeeds in developing realistic, three-dimensional models of materials.

Theoretical findings obtained from microstructure modeling on supercomputers are incorporated in close-to-practice research projects together with industry, among others to improve brake disks, corrosion prognoses, and medical diagnostics. Her studies, among others, focus on the structure of crystals, fabrication processes, porous media, crack propagation, or phase transition between the liquid and solid when alloys solidify. As a materials researcher, she cooperates with geologists, e.g. to analyze the formation of grain structures in rock, and helps to better understand the processes of geologic history and the use of geothermal energy. In cooperation with energy researchers, she develops foam structures with integrated phase transition materials for the use in latent heat storages.

The belated presentation of the Leibniz Prize to Britta Nestler will take place tonight in an award ceremony at the annual DFG meeting in Halle (Saale). The event begins at 7:00 PM in the banquet hall of the National Academy of Sciences Leopoldina. Among those attending will be Dr. Reiner Haseloff, the Minister-President of Saxony-Anhalt, Prof. Dr. Johanna Wanka, the Federal Minister of Education and Research, and Prof. Dr. Eva Quante-Brandt, Science Senator of the State of Bremen and Chairwoman of the Joint Science Conference (GWK).

Since 2010, Britta Nestler has been conducting research and teaching at Karlsruhe Institute of Technology (KIT), where she is a member of the Board of Directors of the Institute for Applied Materials. She was appointed Director of the Computational Materials Science and Engineering Department of the Institute of Materials and Processes of Karlsruhe University of Applied Sciences (HsKA) in 2008. In the same year, she established the Steinbeis Transfer Center “Materials Simulation and Process Optimization” that is also headed by her. Since 2001, Britta Nestler has been professor of HsKA. Before, she spent several research periods abroad. She has four children.

In 2000, Britta Nestler was conferred her doctorate by RWTH Aachen University, where she previously obtained her diplomas in physics and mathematics. As a third subject, she studied pedagogics. Among the prizes she received so far is the State Award for Applied Research (2007) of the Baden-Württemberg Ministry of Science, Research, and the Arts. Together with the Department of Informatics of Karlsruhe University of Applied Sciences, she received the State Teaching Award (2009). In addition, Britta Nestler was granted the Research Prize of Karlsruhe University of Applied Sciences in 2014, the Materials Science and Technology Prize of the Federal of European Materials Societies (FEMS) in 2004, and the Richard von Mises Prize of the Society for Applied Mathematics and Mechanics (GAMM) in 2002. Since 2010, Nestler has succeeded in acquiring funding for research and education in the amount of more than EUR 5.5 million. Apart from Britta Nestler, seven scientists of KIT have been granted the Leibniz Prize by DFG so far.

Since 1986, the Leibniz Prize has been awarded annually by DFG. It was established to honor outstanding scientists for research in all areas of science. The prize money in the amount of about EUR 2.5 million can be spent by the winners according to their own ideas and without bureaucratic expenditure for their scientific work within a period of up to seven years. This year’s Leibniz Prize is awarded to ten scientists. So far, 348 researchers have won the Prize that is considered one of the most important science awards worldwide. Seven Leibniz Prize winners were awarded the Nobel Prize afterwards.