Top Performance Thanks to Optimal Settings

200 Years after the Invention of the Bicycle by Karl Drais, KIT’s Bike Scanner Helps to Adjust a Racing Bike to the Cyclist 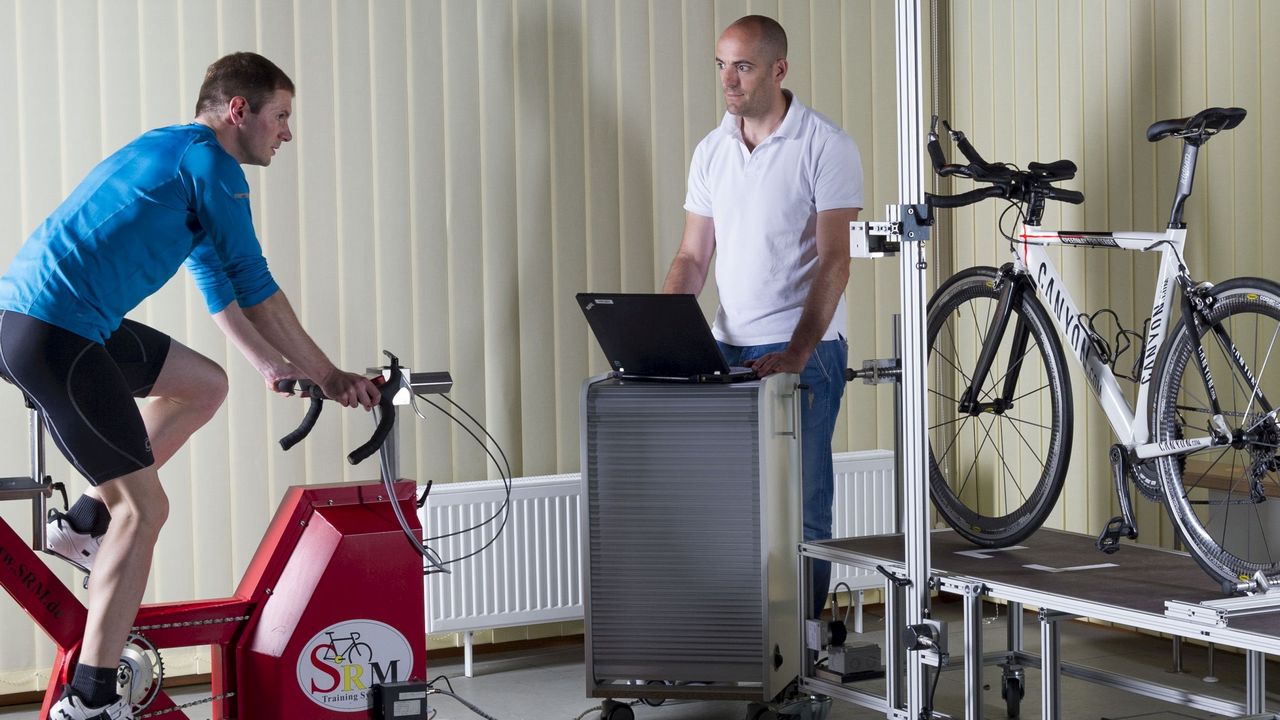 With the help of the bike scanner, athletes can adapt their racing bike optimally to their body. (Photo: KIT/Markus Breig)

Participants in the hardest bicycle races in the world, such as the Race Across America (4800 km), the Race Around Austria (2200 km and 30,000 meters difference in altitude) or Cape Epic in South Africa (700 km, 14,500 m difference in altitude and almost insurmountable terrain), should not only prepare their bodies optimally, but also adjust their sports equipment. Scientists of Karlsruhe Institute of Technology (KIT) have now developed a measurement system, by means of which cyclists can adapt their sitting position exactly to their physical conditions.

“Our bike scanner uses a laser to measure both the athlete and racing bike. Then, a self-developed software calculates the optimum sitting position,” Marian Hoffmann of the BioMotion Center of KIT’s Institute of Sports and Sport Science (ISS) says. “In this way, overloading or inappropriate straining of the knees and the lower back in particular are avoided and energy consumption can be optimized,” the sports scientist explains.

The hardware, a type of overdimensioned bicycle stand, was built by Bernd Hermann, who is responsible for the development and construction of measurement equipment at the BioMotion Center. This stand allows for the precise measurement of the athlete’s body and the racing bike. Measurements are made at anthropometric points of the locomotive system and at relevant points of the bike. Then, the measured data are processed by a self-developed software. On the basis of biomechanical model calculations, the most favorable sitting height and the best possible distance between saddle and handle bar are determined. “This yields the optimum individual sitting position of the cyclist,” Hoffmann says.

The settings determined are then transferred to a bicycle ergometer. Here, researchers can additionally measure the forces acting during pedaling. The athlete is subjected to a three-dimensional motion and strain analysis as well as to a respiratory gas analysis to determine energy consumption. “On this basis, the old bicycle setting can be compared with the new one,” Hoffmann explains.

Accompanying studies by students of sports science with active racing cyclists revealed that this optimization of the settings is successful, Hoffmann reports. However, the bike scanner is not only useful for competitive athletes. The researchers of KIT plan to apply the system to other bicycle types, such as mountain bikes or city bikes.

The bicycle was invented 200 years ago. With the original version, a walking machine without pedal, its inventor Karl Drais, who lived in Karlsruhe, (1785 to 1851), went from Mannheim to Schwetzingen, i.e. 14 km, within one hour on June 12, 1817. Individual adjustment of the handle bar and saddle height, however, was impossible at that time.