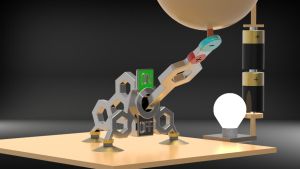 The molecular contact can be switched on and off mechanically and electrostatically. (Photo: KIT)

Nanotechnology constantly allows for new records in miniaturization. Reduction of the dimension of electronic components, however, has physical limits that will be reached soon. Novel materials and components are required. This is where molecular electronics comes in. Scientists of Karlsruhe Institute of Technology (KIT) have now succeeded in developing a molecular toggle switch that does not only remain in the position selected, but can also be flipped as often as desired. This is reported in Nature Communications.

“By replacing conventional silicon-based components, e.g. a switch, by individual molecules, future electronic circuits might be integrated on a space smaller by a factor of 100,” Lukas Gerhard of KIT’s Institute of Nanotechnology says.

The basic structure of the electromechanical switch consists of a few carbon atoms. Three sulfur atoms form the feet that are fixed to a smooth gold surface. The toggle lever ends in a nitrile group with a nitrogen atom. It is flipped when voltage is applied. The resulting electric field exerts a force on the charge of the nitrogen atom. In this way, contact to a second electrode (here, the gold tip of a scanning tunneling microscope) is established.

The complete switch measures not more than a nanometer. For comparison: The smallest structures used in semiconductor technology are 10 nm in dimension. “Molecular electronics, hence, would be big progress,” Gerhard says.

It is not only the size of the switch that is remarkable, but the fact that it works reliably and foreseeably. This means that its operation always leads to a switching state. The contact is either open or closed. So far, implementation of this principle has often failed due to insufficient controllability of electric contacting of individual molecules. For the first time, KIT researchers have now succeeded in opening and closing such a contact between a molecule and a gold tip electrically and mechanically as often as desired, without plastic deformation being caused. 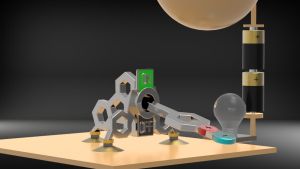 The contact is either open or closed. (Photo: KIT)

In the opinion of Gerhard, progress in synthetic chemistry has resulted in the possibility of making available a large variety of billions of molecular building blocks of identical atomic design. “Their interconnection, however, requires them to be touched without being damaged.” Such a gentle method has now be found and Gerhard considers this to be the decisive novelty.

Note to editors: Many other photos for online image galleries or the creation of animations can be downloaded here as a zip file.