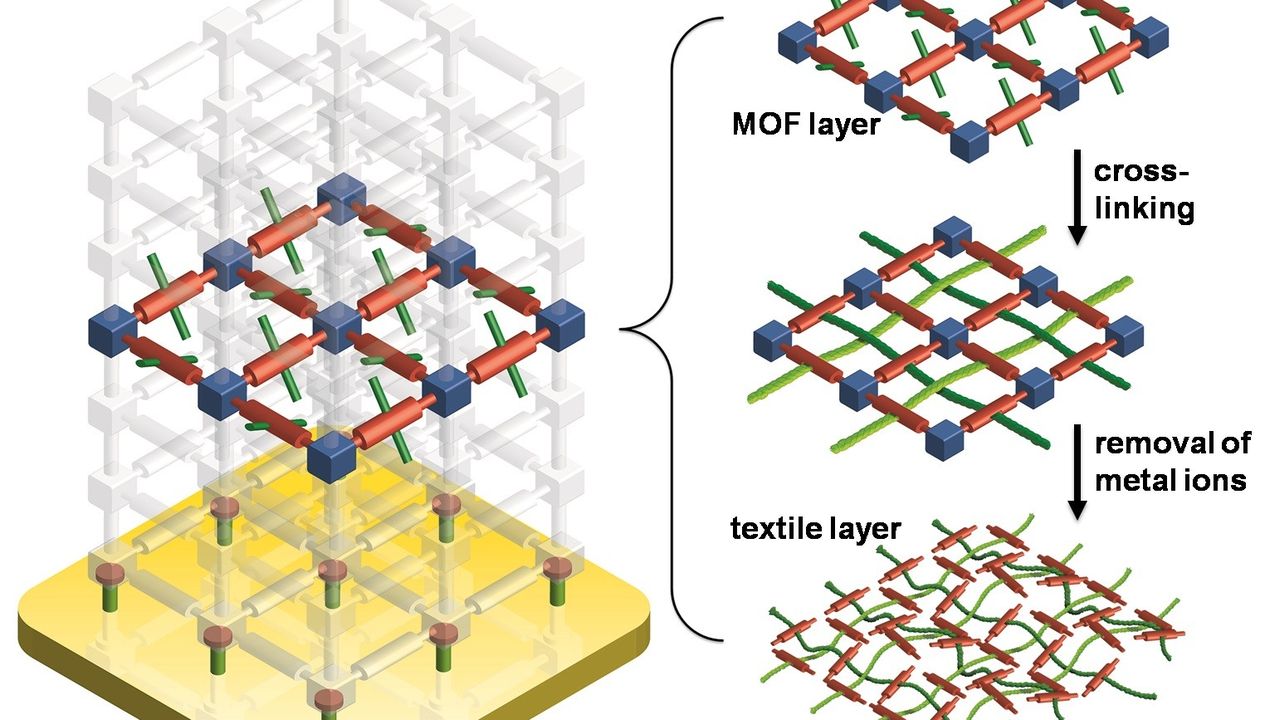 The metal-organic framework is set up like a sandwich (a). The molecular textile layer is woven in an active layer that is embedded between so-called sacrificial layers (b). (Image: KIT)

Researchers of Karlsruhe Institute of Technology (KIT) have made major progress in the production of two-dimensional polymer-based materials. To produce cloths from monomolecular threads, the scientists used SURMOFs, i.e. surface-mounted metal-organic frameworks, developed by KIT. They inserted four-armed monomers, i.e. smaller molecular building blocks, into some SURMOF layers. Cross-linking of the monomers then resulted in textiles consisting of interwoven polymer threads. This work is now presented in Nature Communications. (DOI: 10.1038/ncomms14442)

Self-organized cross-linking of polymer threads, i.e. of extremely long molecules, to two-dimensional tissues is a big challenge in polymer chemistry. With the help of a bottom-up process to cross-link smaller molecules, so-called monomers, scientists of the Institute of Functional Interfaces (IFG) and Institute of Nanotechnology (INT) of KIT now made an important step towards reaching this objective. They produced a tissue from monomolecular polymer threads by using SURMOFs, i.e. surface-mounted metal-organic frameworks, as looms. This approach is now presented in Nature Communications.

The SURMOFs developed by IFG are frameworks consisting of metallic node points and organic linkers that are assembled on a substrate layer by layer. They have a crystalline structure and can be customized to a large range of the applications by combining various materials and varying the pore sizes. For weaving two-dimensional textiles, the KIT scientists specifically inserted special connection elements, i.e. four-armed monomers, into the SURMOF layers for later cross-linking. Then, these active SURMOF layers were embedded between so-called sacrificial layers. “In this way, we produced a sandwich-type setup to ensure that the textiles produced really are two-dimensional, which means that they have a thickness of one molecule layer only,” Professor Christof Wöll says. He heads the IFG and is the corresponding author of the publication together with Professor Marcel Mayor of INT.

The scientists then applied a catalyst in these active SURMOF layers to start a reaction for linking the monomers to polymers. Afterwards, the metallic node points were removed. Flat tissues of monomolecular polymer threads remained. “The polymer threads are kept together by the mechanical forces resulting from the weave pattern,” Marcel Mayor explains. “Hence, the molecular tissues are as flexible as textiles produced in a conventional way.”