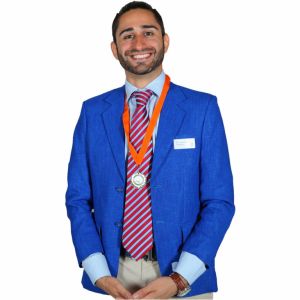 With his student startup, Allen Ali Mohammadi made it into the Forbes list. (Photo: KIT/Victor Ackerheim)

After his grandmother died of a sudden heart attack, Allen Ali Mohammadi started to develop technology for the early diagnosis of heart problems. The result of the development work by 27-year-old Mohammadi, who studies mechanical engineering at Karlsruhe Institute of Technology (KIT), impressed the team of the Forbes Business Magazine such that the born Iranian has now been included in list of the most influential young Europeans.

The US magazine is mainly known for its rankings of the richest and most powerful. In “30 Under 30”, the magazine now lists the most ingenious founders, entrepreneurs, and innovators from ten branches and 51 countries.

Forbes reports that the technology developed by Mohammadi together with his older brother Max (28) is based on artificial intelligence and combines demographic data with medical findings. “Everything started four years ago, when my grandmother suddenly died of a heart attack during a family party,” Mohammadi says. For him, this was a terrible shock, because there had not been any symptoms of cardiac insufficiency. Mohammadi thinks that many cardiac diseases are not detected, because patients do not consult the doctor due to lacking symptoms. Now, his innovative work has resulted in a precise, low-cost, and non-invasive method for early detection of heart problems. Individual data, such as blood values and ECG results, are combined with statistical population data.

For commercialization of his “Complex Disease Detector”, Mohammadi, who is currently attending the Energy Technologies (ENTECH) master’s program at KIT’s Department of Mechanical Engineering, founded the company Hippogriff AB: “It is my vision to make this method accessible for everybody and to save as many lives as possible. In addition, I want to establish a company in Germany in order to commercialize my innovation and to give something back to German society.”

Mohammadi’s project is not only liked by the Forbes expert jury. His business idea was also successful in a competition for the most successful startups, most innovative projects, and best young business talents in Europe launched by the European Institute of Innovation and Technology (EIT).