For the First Time, Biodegradable Polymers Were Synthesized by Chemical Vapor Deposition/ Paper in Angewandte Chemie 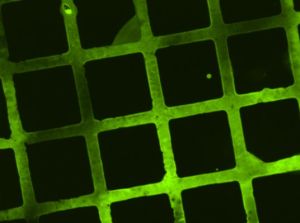 Medical implants often carry surface substrates that release active substances or to which biomolecules or cells can adhere better. However, degradable gas-phase coatings for degradable implants, such as surgical suture materials or scaffolds for tissue culturing, have been lacking so far. In the journal Angewandte Chemie, researchers of Karlsruhe Institute of Technology now present a polymer coating that is degraded in the body together with its carrier. (DOI:10.1002/ange.201609307)

“Our new degradable polymer films might be applied for functionalization and coating of surfaces in biosciences, medicine, or food packaging,” says Professor Joerg Lahann, Co-Director of the Institute of Functional Interfaces of Karlsruhe Institute of Technology (KIT). Together with an international team, he produced polymer films with functional groups as “anchor sites” for fluorescent dyes or biomolecules.

For the first time, the researchers present a CVD (chemical vapor deposition) method to produce biodegradable polymers. Via special side groups, biomolecules or active substances can be attached. This opens up new potentials for e.g. coating biodegradable implants. Polymerization by chemical vapor deposition is a simple and widely used method to modify surfaces, by means of which also complex and irregular carrier substrates can be coated homogeneously with polymers.

In CVD polymerization, the initial compounds are evaporated, activated at high temperature, and deposited onto surfaces, where they polymerize. However, so far it has been possible to coat permanent implants only. Coating has been impossible for materials that are to be degraded after fulfilling their tasks, such as surgical suture materials, systems for the controlled release of substances, stents releasing medical substances or scaffolds for culturing tissue. Biodegradable coatings could not be produced by CVD.

Now, this gap is closed, as scientists of Karlsruhe Institute of Technology, University of Michigan (Ann Arbor, USA), and Northwestern Polytechnical University (Xi’an, China) for the first time synthesized a CVD polymer with a degradable backbone. The team applied co-polymerization of two special monomer types: The para-cyclophanes usually used for this method were combined with cyclic ketene acetals. While classical polymers on the basis of para-cyclophanes are linked by carbon-carbon bonds exclusively, ketene acetal is repositioned during polymerization, such that ester bonds (e.g. bonds between carbon and oxygen atoms) are formed in the polymer backbone. Ester bonds can be cleaved in aqueous medium.