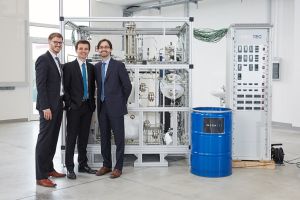 The founders of INERATEC, a spinoff of KIT, develop compact, microstructured chemical reactors for conversion of gases into high-quality liquid fuels. (Photo: KIT)

Demand-driven production of liquid fuels from regenerative energy sources is a major element of the energy turnaround. Production of synthetic fuels from solar energy and carbon dioxide extracted from air is the objective of the SOLETAIR project started now by INERATEC, a spinoff of Karlsruhe Institute of Technology (KIT), in cooperation with Finnish partners. Together, the partners plan to take into operation the first chemical pilot plant worldwide. It is so compact that it fits into a ship container and produces gasoline, diesel, and kerosene from regenerative hydrogen and carbon dioxide.

The plant consists of three components. The direct air capture unit developed by the Technical Research Center of Finland (VTT) extracts carbon dioxide from air. An electrolysis unit developed by Lappeenranta University of Technology (LUT) produces the required hydrogen by means of solar power. A microstructured, chemical reactor is the key component of the plant and converts the hydrogen produced from solar power together with carbon dioxide into liquid fuels. This reactor was developed by KIT. The compact plant was developed to maturity and is now being commercialized by INERATEC.

“Projects, such as SOLETAIR, are essential for the success of the energy turnaround,” Professor Thomas Hirth, Vice President for Innovation and International Affairs of KIT, says. “Commissioning of this pilot plant is an example of successful transfer of KIT’s research innovations to industry.” INERATEC GmbH is a spinoff of KIT and develops, constructs, and sells compact chemical plants for various gas-to-liquid and power-to-liquid applications. The spinoff is supported under the EXIST research transfer program of the Federal Ministry for Economic Affairs and Energy.

“We are proud of our participation in this promising international project,” INERATEC founder Dr. Tim Böltken emphasizes. In the future, KIT, INERATEC, and VTT plan to extend their cooperation. Under the national research alliances of “Energy Lab 2.0” and “Neo-Carbon Energy,” work will focus on the investigation and development of innovative energy systems based on renewable energy sources, novel storage technologies, and the conversion of renewable energies into chemical energy carriers. In addition, KIT and INERATEC contribute their expertise to the “Power-to-X” Kopernikus project funded by the Federal Ministry of Education and Research.

“The energiewende will only be a success, if we pool our know-how and jointly strengthen the competencies of European industry in the energy sector,” VTT scientist and SOLETAIR project head Dr. Pekka Simell says with respect to the planned cooperation. The new power-to-liquid plant will be taken into operation at the BIORUUKKI Piloting Center of VTT this year. In 2017, operation is planned to be continued on the campus of LUT. The SOLETAIR project will be completed in mid-2018. It is funded with EUR 1 million by the Finnish Funding Agency for Technology and Innovation (Tekes).

The founders of INERATEC on the photo, from left to right: Tim Böltken, Philipp Engelkamp, and Paolo Piermartini.