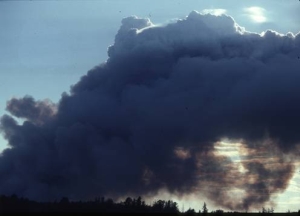 Future development of climate and population influences the development and spreading of wildfires. (Photo: Almut Arneth)

Every year, about 350 million hectares of land are devastated by fires worldwide, this corresponds to about the size of India. To estimate the resulting damage to human health and economy, precise prognosis of the future development of fires is of crucial importance. Previous studies often considered climate change to be the most important factor. Now, a group of scientists, including researchers of Karlsruhe Institute of Technology (KIT), has found that population development has the same impact at least. The results are presented in the Nature Climate Change journal (dx.doi.org/10.1038/nclimate2999).

Fires in forests and savannas are essential for many natural ecosystems: They contribute to natural rejuvenation and biodiversity of forests, for instance. However, they also emit large amounts of air pollutants, such as carbon black or ozone. “In the future warmer and frequently drier world, the risk of fires will further increase,” Almut Arneth, Professor of the Atmospheric Environmental Research Division of KIT’s Institute of Meteorology and Climate Research, says. “This increases the risk of damage to people.” The environmental researcher and colleagues from the University of Lund in Sweden and the US National Center for Atmospheric Research in Colorado studied how fires of forests and savannas will develop and spread in the future. Their global model study considers factors, such as climate change or vegetation growth, but also anthropogenic impacts. As a basis, the scientists used satellite photos of wildfires from 1997 and later. These photos were linked with computer simulations of the development of vegetation worldwide as a function of climate change. In addition, the scientists took into account various scenarios of global climate models and country-specific population development.

The results turned out to be more complex than previously assumed: “So far, we have thought that climate change increases the number of wildfires,” Arneth says. “In large parts of the world, however, the total area burnt did not increase, but decrease in the past century.” But simulations of the impact of climate change exclusively produced a worldwide increase of fires in the future, in particular in North America, Southern Europe, Central Asia, and large parts of South America. “Hence, there had to be another reason for the decrease in fires. When we extended our models to cover demographic factors, the impacts of climate change were reduced significantly,” Arneth explains. According to her, the reason is that man largely suppresses wildfires by actively extinguishing these fires or due to the fragmentation of landscape. Roads or fields inhibit the spreading of forest fires. Hence, the number of fires decreases with increasing population density. In the future, growing population and conversion of rural into residential areas will slow down the formation of wildfires in Africa and parts of Asia and South America, she says.

But Arneth also emphasizes that this does not mean that the risk of fires for man and the environment will decrease. The number of residential areas in fire-susceptible regions is increasing. Due to the growing population density in these areas, the risk is higher for the people to suffer damage from fire. Vice versa, a low population density favors the formation of fires: “Rural areas left by people moving to cities will become increasingly susceptible to wildfires,” Arneth says. The study results will contribute to better assessing future fire risks and to improving fire management strategies: “Spatial planning and climate policy have to be closely linked. The risk of wildfires can be reduced by careful planning and sensible use of the land surface.”