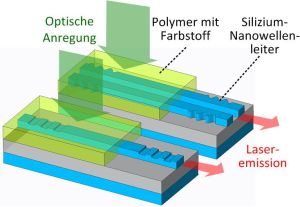 Organic laser on a silicon photonic chip: Optical excitation from above generates laser light in the waveguide. (Graphics: KIT)

In the area of nano photonics, scientists for the first time succeeded in integrating a laser with an organic gain medium on a silicon photonic chip. This approach is of enormous potential for low-cost biosensors that might be used for near-patient diagnosis once and without any sterilization expenditure similar to today’s strips for measuring blood sugar. The researchers now present the new laser in Nature Communications: DOI: 10.1038/ncomms10864

This is the first time organic lasers were integrated on a single silicon photonic chip, Christian Koos, researcher of KIT’s Institute of Photonics and Quantum Electronics (IPQ) and Institute of Microstructure Technology (IMT), reports. “The main advantage of the lasers consists in the fact that production of large series is associated with low costs. In the long term, manufacture at a price of some cents per laser might be feasible.”

One of the major challenges associated with the fabrication of optical microchips consists in integrating a number of different components on one substrate at low cost. For some years now, it has been possible to produce optical components from silicon. This so-called silicon photonics uses highly developed nanotechnological fabrication processes of microelectronics and allows for the inexpensive production of large numbers of high-performance photonic components. Such components of fractions of a micrometer in size can contribute to making information technology more energy-efficient and are highly suited for compact biosensors.

The problem of integrating light sources on the chip, however, still remained unsolved, as the silicon semiconductor is hardly suited as a light emitter due to its electronic structure. During electron transfer between energetically different states, the energy is preferably released in the form of heat rather than light.

Researchers of KIT have now developed a new class of lasers in the infrared range. For this purpose, they combine silicon nano waveguides with a polymer doped with an organic dye. The energy to operate this “organic” laser is supplied from above, vertically to the chip surface, by a pulsed light source. The laser light produced is directly coupled into a silicon nano waveguide. The researchers succeeded in generating pulsed laser radiation with a wavelength of 1310 nm and a peak power of more than 1 Watt on one chip. The new infrared lasers are presented in the Nature Communications journal. By the use of various dyes and laser resonators, the wavelength of laser radiation can be varied over a wide range.

The components might be used among others for biosensors with a variety of integrated laser light sources and wavelengths adapted to the special application. Such sensors may be used to measure medically relevant substances. To prevent contamination, it is advantageous to produce these chips at minimum costs and to use them once only. In this way, the sensors can be applied directly on the patient or in medical practices (point-of-care diagnosis).