German Award for Innovations Relating to the Climate and Environment in the Category of Environmentally Compatible Technologies Is Granted to the AmpaCity Project / Prize Money EUR 25,000 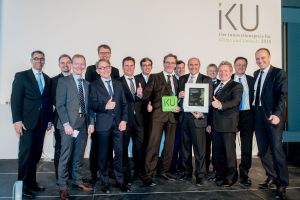 Mathias Noe, KIT (1st on the right) and the other AmpaCity partners of RWE and Nexans celebrate the Award for Innovations Relating to the Climate and Environment. (Photo: IKU)

For two years now, the longest superconducting cable in the world has been operated successfully in the city center of Essen. It has transmitted about 35 million kilowatt-hours of electricity, corresponding to the energy needed by 10,000 households. The AmpaCity project thus demonstrates how power grids can be made fit for the future. For this, Federal Minister of the Environment Barbara Hendricks handed over the German Award for Innovations Relating to the Climate and Environment in the category of environmentally compatible technologies to the project partners, one being Mathias Noe of KIT.

“For the transformation of the energy system, we need intelligent and efficient power grids. Only then will we succeed in optimally and sustainably integrating renewable energies into our energy system,” the President of KIT, Professor Holger Hanselka, says. “For this reason, KIT conducts research into promising superconductor technologies and combines energy research with information technology. The German Award for Innovations Relating to the Climate and Environment that has now been granted to AmpaCity with KIT being the research partner encourages us in our determination to proceed on this way.”

“AmpaCity demonstrates that high-temperature superconductivity has made its way from an idea winning the Nobel Prize to industrial application,” Professor Mathias Noe, KIT, explains. “I am very pleased that this milestone is honored by the German Award for Innovations Relating to the Climate and Environment.”

High-temperature superconductivity, i.e. zero-resistance electricity transport at -200°C instead of -270°C goes back to research conducted by Alex Müller and Johannes Georg Bednorz. For their work, they were granted the Physics Nobel Prize in 1987. Thanks to the properties of the superconducting material, a special ceramic, and its cooling to -200°C, the cable is turned into an ideal electric conductor. Compared to conventional cables, the modern superconducting cable can transmit five times the amount of electricity per cross section. In Essen, the 10,000 volt superconducting cable replaces a conventional 110,000 volt line on a length of one kilometer. Since its commissioning on April 30, 2014, the cable has transmitted about 35 million kilowatt-hours of electricity, which corresponds to the energy needed by 10,000 households.

Prior to the AmpaCity project, KIT made a detailed study of the technical feasibility and economic efficiency of the use of superconductor technology on the urban medium-voltage level. Superconducting cables are the most sensible solution to reduce the use of high-voltage cables in urban grids. The grid structure is simplified and transformer stations needing considerable resources and areas are no longer required. Although high powers in inner cities can also be transmitted by copper medium-voltage cables, which is very cost-efficient, the associated ohmic losses are much higher. According to the study, use of 10,000 volt superconductors in urban distribution grids and dismantling of the high-voltage system would enhance efficiency in the medium term and lead to a leaner grid, decreased operational maintenance costs, and reduced area consumption.

The AmpaCity project partners are RWE as the network operator, the cable manufacturer Nexans that did not only supply the energy cable, but also a superconducting short-circuit current limiter for test operation, and Karlsruhe Institute of Technology (KIT) that accompanies the field test scientifically. The Federal Ministry for Economic Affairs and Energy (BMWi) contributed funds in the amount of EUR 5.9 million to the total budget of EUR 13.5 million.

The German Award for Innovations Relating to the Climate and Environment is granted to ideas aimed at protecting the climate and environment and, thus, at improving our living conditions. The jury consists of representatives of industry, science, media, and politics. Chairman of the jury is Klaus Töpfer, former Minister of the Environment and former Director of the United Nations Environment Programme. The award is granted in five categories. The winners were handed over the award at a ceremony on January 20, 2016 by the Federal Ministry for the Environment, Nature Conservation, Building and Nuclear Safety (BMUB) and the Bundesverband der Deutschen Industrie e.V. (BDI, umbrella association of German industry). In each category, the winners receive a prize money in the amount of EUR 25,000 to support their climate and environmental protection activities. More information may be obtained at www.iku-innovationspreis.de (in German only).