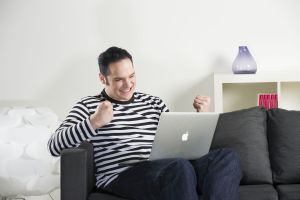 Online auctions combine shopping with entertainment and thrill. When perceiving the competition of real contenders, people tend to increase their bids. (Photo: KIT)

The thrill is part of the game – whoever waits for his bid to be accepted on online auction platforms, feels the excitement in the bidding war for the object of desire. The heart beats faster, palms start to sweat. Physiological measurement methods of researchers of Karlsruhe Institute of Technology (KIT) now reveal the influence of emotions on the behavior of users of electronic markets. The September issue of the Journal of Retailing now reports the results of the KIT study. DOI:10.1016/j.jretai.2015.01.003

Nowadays, internet auctions play an important role in online trading. No matter whether you want to buy a hedge trimmer or an antique pocket watch – unlike purchases by a click at a fixed price, online auctions provide the atmosphere of a competition for the auction object. Whoever perceives the competition of real contenders, e.g. by avatars or photos on the screen, wishes to stay in the race – and increases his bid. This is a result of a KIT study with more than 450 test persons.

Online auctions combine shopping with entertainment, fun, and excitement. This is the charm of this type of trading and considered the reason of its success. The battle against the expiring time until the defined end of the auction, however, is not sufficient to boost the auction fever so strongly that a bidder increases his bid. “It was shown by laboratory experiments that time pressure enhances the thrill and heartbeat, but the bidder will only become more venturesome, if he notices that he competes with other, real contenders,” says Marius Müller of the Institute of Information Systems and Marketing (IISM) of KIT. At the IISM Chair of Professor Christof Weinhardt, the doctoral student studies user behavior on electronic markets. The study among others focused on the decision behavior during online auctions based on measurements of heartrate and skin conductance. By evaluating physiological data, the excitement of bidders can be assessed objectively to complement their own subjective opinion.

“Contrary to assumptions in theory, decisions are not made by a sensible homo oeconomicus, but driven by emotions,” Müllers says. For this reason, experimental economic research at KIT also focuses on emotions, such as joy and disappointment, which are studied on the basis of physiological parameters. “Behavioral economics bridges the gap between observation and theory,” the scientist explains. The findings with respect to the role of bidder emotions might be used by traders to offer their customers attractive shopping experiences and reach higher incomes by an appropriate design of the auction portal. Auction participants become aware of the influence of their emotions on their decision.

At KIT’s Karlsruhe Decision and Design Lab (KD2Lab), emotional states of test persons in decision situations can be examined. The laboratory with presently twelve workplaces will be extended in the near future for the interaction of up to 40 participants while measuring their physiological data. “It will be one of the biggest laboratories of this kind in Europe,” Müller says.

The results of the study are reported by the September issue of the Journal of Retailing under the title “Auction Fever! How Time Pressure and Social Competition Affect Bidders’ Arousal and Bids in Retail Auctions.” The study is published by Marius Müller and the two other KIT scientists involved in the study, Professor Jan Krämer, who meanwhile holds a Chair at the University of Passau, and Marc Adam who now teaches at the University of Newcastle in Australia.